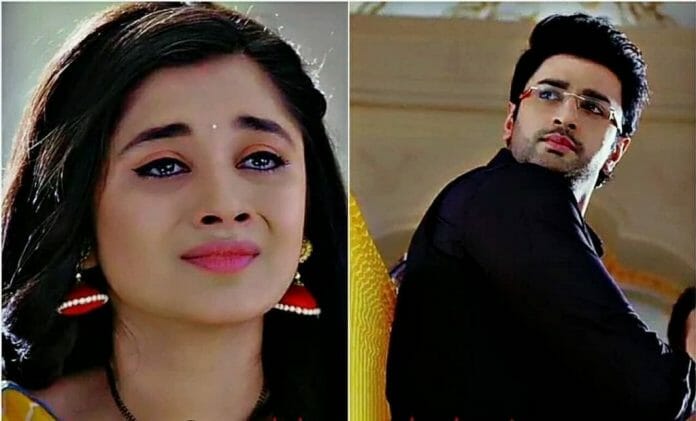 Episode begins with Akshat is crying and in the hallroom of the Jindal Bhawan and suddenly he noticed Guddan comes down and is walking cluelessly and he stops her and asks where are you going? She says I am going to my father’s house and Aj says this is also your house and she goes from there after saying that you are swear on this kid that neither you will stop me nor you will come in between me and my goal.

Akshat is stunned with her words and let her go and she walks out from the house. After sometime Dadi comes to meet Akshat and he says Guddan is not ready to listen to me at all, she thinks that I betrayed her but even you know I can never even think of doing such things to Guddan. His mother says I am telling you a story of my childhood and says when we love someone then we also hurt them the most.

However it is in our hands to take care of the love that binds us together and forget the hurt and pain. She says your intentions of doing thing is noble but the way you conducted the entire thing is wrong, you actually broke the trust of Guddan and she got hurt. AJ says I love her so much and want her to be happy but did you see how she went away from the house giving me swear of our unborn kid. His mother says when we got hurt the first person we got reminded of is our parents, she went to meet her father and after sometime she will be fine. Guddan is walking on the streets cluelessly and all the moments of recent time is flashing in front of her eyes.

Antara is waiting for her in the street and says I will use your anger and after this I will make you and AJ far away from each other that there will be no hope left for you two to become together. Antara says I wish I can kill you but killing you will lessen the spice of my life. She takes Guddan inside the car and then she opened her eyes and find herself in OT. The doctor says your child is not okay and for this you have to operate on you and asks her to sign a paper. She did it in her drowsy state and says please save my child. AJ gets a call from the hospital that his wife is hospitalised and he runs to see Guddan.

Guddan gets sense and asks about her child when Guddan asks the doctor about her child and the doctor says you will feel weak for somedays now and on your command we did your abortion . Guddan and AJ gets stunned with it and she confronts the doctor. Aj says to Guddan that I trust you and I know you can not do anything like this. The doctor presented proofs one after another in front of Akshat and says if your wife didn’t asks us to do so, then why do we do this to you?

He shows AJ a cctv footage where it was shown that guddan is coming inside the hospital all walking and talking to the doctor. Antara says these people earned a lot of money but couldn’t afford to have minimum sense that it is a child’s play to change face in a video. Even college going lads do these tricks easily in their mobile. However, for the sake of my hatred for Guddan I have to apply all these tricks to get her trapped.