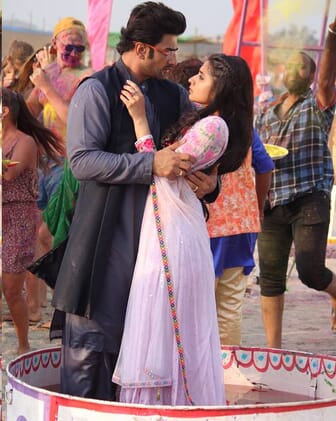 Today’s episode starts with ladies celebrates the Karvachauth. Guddan looks at the door and waits for AJ. Revti tells to Saraswati that Guddan is very confident that Alisha will bring AJ back. Saraswasti ask Revti not to worry. Alisha in her room sees the box given by Guddan. She gets a call from Revti and Revti ask her not to listen to Guddan at any cost. Alisha hangs up the call. Guddan ask Durga and Laxmi to start the puja. She waits for AJ. Revti comes and says only few minutes is left for the Karavchauth day to get over and smirks wickedly. AJ makes his entry at the same time.

AJ’s mother, Guddan, Durga, Laxmi and others gets happy seeing AJ. Guddan and AJ perform the pooja together. Revti and Saraswati stands shocked. AJ picks Guddan in his arms and takes her to the room. Saraswati gets angry on Alisha for spoiling their game. They look for Alisha and see her performing the pooja. Revti ask to Alisha why she is performing pooja. Alisha asks her to wait and later shows the name plate of Antra’s name. She pinned Antra’s name plate and throws the AJ’s name plate.

Alisha tells to everyone that now jindal house is Antra’s house. Later, Guddan again challenges Revti and says she will bring Alisha and AJ together.

Revti goes to Alisha and says because of her Guddan and AJ won. Alisha chokes Revti’s throat and says Alisha didn’t lost to Guddan in fact she brought AJ back to separate the duo forever. She says she will show her sample in the evening.

Jindal family gets ready to celebrate Dhanteras festival. AJ and Guddan about to perform the pooja but Alisha say she will to the Pooja first. Guddan ask Alisha to start the pooja. Further, Alisha again creates the scene and announces that she will remove Guddan’s name from the house forever. (Episode Ends)