Episode starts with Alisha coming to her birthday party and everyone wishes her. She comes to them and AJ and Guddan too wish her. Guddan gives knife to Alisha to cut but to everyone’s shock she stabs Guddan with the knife.

12 hours ago :
AJ and Guddan comes to Alisha room to room reveal about Antara’s death when they find Alisha breaking numbered mud pots. They asks her the reason for it for which she says that it’s her birthday today and there is no cake for her to cut and she could only offer to smash them. Guddan and AJ gets happy hearing it and wishes her. AJ wants to throw a party but Alisha taunts him for not knowing his own daughter’s birthday. Guddan manages the situation and asks her to be ready for the party. Alisha leaves cribbing that she doesn’t even have a proper dress for the party. AJ promises to make up for all of Alisha’s birthday that he has missed till date.

Parv informs Saraswati and Revati about the birthday party and decides to reveal the truth of Antara’s death to Alisha just before the party for more entertainment. The evil trio smirks. AJ is running around the house arranging things and everyone gets happy seeing him getting all worked up for his daughter’s birthday. He accidently bumps with Guddan and they both fall into a romantic eyelock. AJ is lost in Guddan but Guddan brings him back saying that everyone’s watching. He looks around and everyone pretends not noticing it.

Guddan asks about the cake and AJ is nervous about whether he could make it right and fears what if Alisha doesn’t like it
Both Guddan and AJ are in the kitchen and Guddan asks AJ to write ” my cake is the best cake in the world” and also write “No one can make better cake than him for his daughter”. She asks him to start baking and whenever he feels asks him to look at the words. AJ smiles and does as she says and they both make a perfect cake for Alisha. AJ gets satisfied with the cake and they both write “For our dearest daughter” On the cake.

AJ is still checking on the decorations when Daadi scolds both Guddan and AJ for not being ready yet and urges them to go and get ready. They were about to go when someone enters. The servant scolds him for entering without permission and the stranger breaks the vase in his hand and behaves with Attitude. Guddan wonders about who he is but Daadi stops her and asks her not to interfere.

AJ goes to the person and they both throw insults at each other. Guddan is about to intervene but Daadi stops her. The stranger all of a sudden pushes AJ and Guddan rushes to him. She gets confused when both of them starts laughing. The stranger takes Daadi’s blessing and AJ reveals that he’s best friend Mr. Vikrant Goel and they always behave this way. Vikrant asks about Guddan and AJ introduces her as his wife shocking Vikrant. 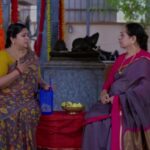 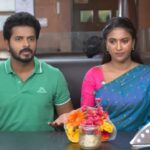 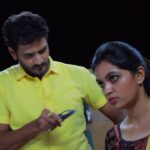 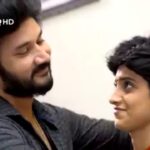 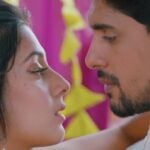