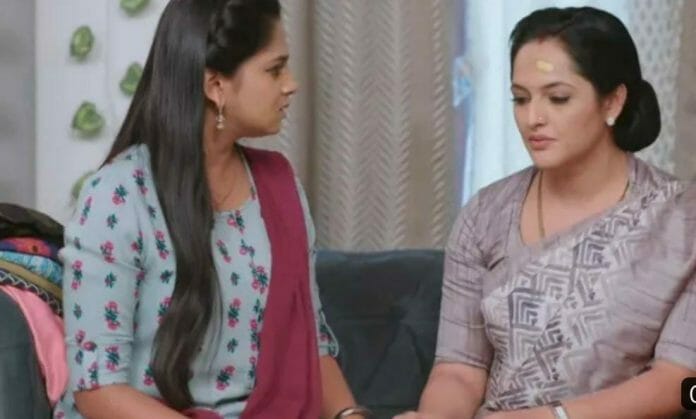 Maa TV popular show Guppedantha Manasu serial is witnessing some major turning points.
As reported earlier, Devayani asks Rajiv to do her work correctly. Rajiv says he won’t leave any opportunity to get Vasudhara. Mahindra comes there and confronts her with whom she is talking at this time. Devayani lies to him that she is helping someone by giving money.

The next day, Devayani asks Mahindra and others when is their trip to Vasudhara’s place. Vasudhara asks them to not come with her. Devayani gets mad at her. Phaneedra controls her and asks Vasudhara to tell her opinion.

Vasudhara says I don’t know what’s my house situation at present so she needs to explain to her parents what happened here by going alone and she is going to make her parents invite them willingly. Vasudhara says her dad has a lot of anger and says he might say something in his anger against them and it will not be right for them.

Rishi says Vasudhara knows about her family better than us and says they should listen to Vasudhara. Phaneendra says to Vasudhara to go first and says if their marriage happens with her parent’s consent then it will be an honour for them.

In the upcoming episode, viewers are going to witness Rishi helping Vasudhara get in the car. Rishi sees Vasudhara has tears in her eyes. Rishi asks Vasudhara why is she crying. Vasudhara says it is because of the love he showed. Vasudhara says she couldn’t have agreed to go if he didn’t support her.

Rishi encourages Vasudhara and says he will always stand behind her. Vasudhara leaves in a car. Vasudhara gets a message from Rishi asking her to be careful on the trip.

Will Vasudhara be able to convince her father? Will Rishi find out Devayani’s other face?