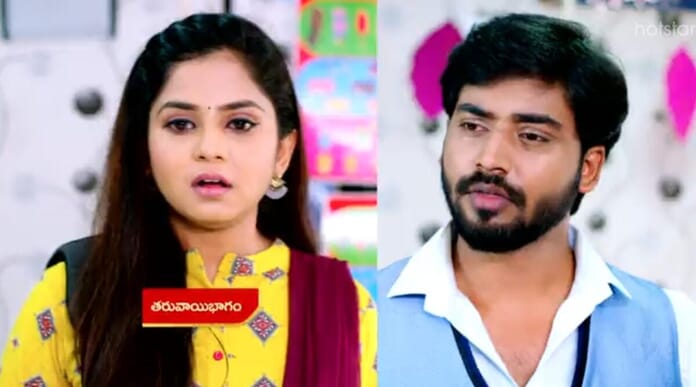 Star Maa’s popular hit show “Guppedantha Manasu” is all set to engage it’s audience with its story line. The audience is in love with the unique storyline and the lead couple “Vasudhara” and “Rishi”. In yesterday’s episode, We saw Rajeev coming into a house and asking as to why did he call him to Sireesh. Sireesh says that he got to know about the thief hence he is here and opens his mobile. Rajeev tries to escape but Rishi comes there and tells him that he won’t let him escape. Rajeev comes back inside and tries to emotionally blackmail Vasudhara. He begs her not to get him arrested and tells her that he has mended his ways. The police arrest him. Later Vasudhara tells Sireesh that she wants to take the case back in the restaurant making Rishi upset. She tells them why she wants to take the case back.

In today’s episode episodes we will get to see Rishi leaving the restaurant angrily after she tells him why she wants Rajeev to be free. At Jagathi’s home, Mahindra says that it’s wrong to go near a wounded tiger. Vasudhara shares her views. Jagathi praises her for her thoughts. Rishi gives tuition fees to Vasudhara. He asks her to count them and says a quote making her laugh. In the office, Vasudhara tells the Chairman to celebrate Jagathi’s birthday as she has done soo much for the college. He agrees. Jagathi lashes out at Vasudhara for trying to celebrate her birthday in the office. Rishi comes there with a file.

In the upcoming episodes we will see Vasudhara telling her friend that she should buy a beautiful gift for Jagathi. Rishi asks her as to whose birthday it is. She says someone close to her heart not wanting to upset him. In the bakery Rishi choses cake while Vasundhara thinks that it’s a big gift for Jagathi. The man asks them as to whose name he should write to which Vasudhara gets shocked.

How will Rishi react to the celebrations? What will Rishi do once he comes to know that he chose cake for Jagathi?