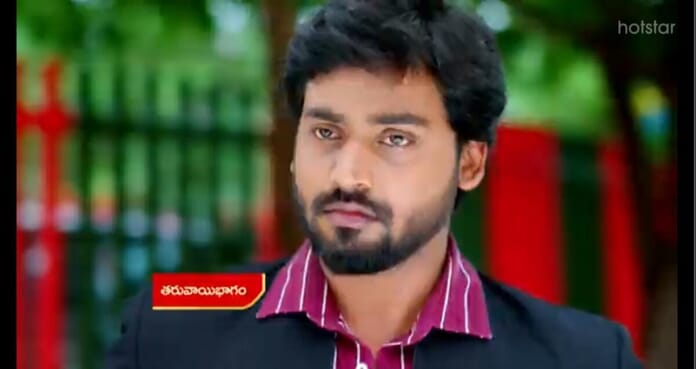 In yesterday’s episode we saw Rishi looking at his handkerchief which Vasudhara used to bite the chocolate and remembers the moments. The handkerchief blews away because of the blowing wind. Devayani is about to step on it but Rishi stops her from doing so and takes it from the floor. Devayani asks him as to why he is treating it like it is made of silk. Rishi doesn’t say anything. Devayani tries to provoke him again Vasundhara by bringing her up but fails to do so. He goes back to his room and sitting on the bed, looks at the handkerchief in his hand sitting on the bed and thinks about Vasudhara.

In the today’s episode we will get to see Devayani asking Dharani to know what is going on in his mind after getting to know that they both were together all day. Dharani says that’s not manners to which Devayani lifts her hand on her and asks her not to teach her manners. She mocks her saying her son stays away from her because of her this triat. Dharani breaks into tears. Rishi shouts at Vasudhara and asking her can’t she keep things to herself and was it important to tell everyone about their meeting with Slum. Vasundhara asks whom did she say to which he says she told Sireesh. Rishi asks Jagathi to stop letting Sireesh come to their house to meet Vasudhara. Jagathi says she can’t do anything if he likes her and wants to meet her. He says some people act on their liking while some deny to accept that they like someone.

In the upcoming episodes we will see Rishi asking for Vasudhara. Mahindra says Vasudhara has gone out. Rishi asks Jagathi whether she has told her before leaving. Jagathi says she didn’t. Rishi calls Vasudhara. Vasudhara shows Rishi’s call to Sireesh who snatches the phone and cuts the call. Rishi saying she didn’t ask anyone’s permission amd is even cutting his call. Jagathi thinks that Vasudhara has pushed her into a problem.

How will Rishi realise his Love for Vasudhara? Will Rishi ever let Jagathi come close to him? Can Vasudhara mend the differences between them? Will Vasundhara ever be able to bring Rishi and Jagathi closer? When will Vasudhara anc Rishi realise their Love for each other? What will Rishi do?

Keep checking out this space for the latest news of your favourite Telugu shows.0000