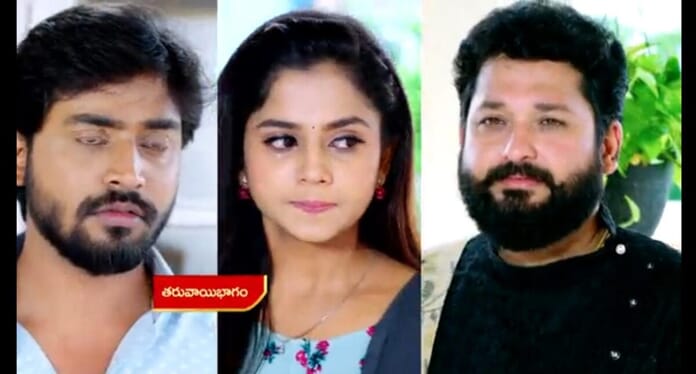 Star Maa’s popular hit show “Guppedantha Manasu” is all set to engage its audience with its story line. The audience is in love with the unique storyline and the lead couple “Vasudhara” and “Rishi”. In yesterday’s episode, We saw Vasudhara telling Sireesh that someone has requested her to do something who has always helped her and stood by her. But the request he has made for her is very hard to fulfill. Sireesh is about to say something when Rishi comes there and asks them about it. Sireesh says that he is giving solution to Vasudhara’s problem. Rishi sits on the chair near the table and asks her about the problem. Vasudhara looks at him shocked. But anyways tells him indirectly. She is about to leave but he holds her hand and gives her a suggestion. Sireesh tells him that he and Vasudhara are planning to go to a movie which upsets him. In the house Mahindra gives a befitting reply to Devayani who is in a fix. Later Dharani tells Rishi to handle Vasudhara in a smooth way as children these days don’t listen to harsh words and leaves from there.

In today’s episode we will see Rishi going to Jagathi’s house who stands up from the sofa getting shocked. He saya that she is a maths lecturer, a gold medalist. He tells her that she shouldn’t only keep her students with her giving her seat in the college but also watch out as to where they are going. Vasudhara comes there and asks her as to what he is telling her to which he says that he is telling her about her movie plan with Sireesh. Vasudhara gets furious hearing it and argues with him. Jagathi shouts at her to stop. Mahindra tells Rishi that vasudhara didn’t go the movie as it won’t look good. Rishi gets shocked and asks him as to why didn’t he tell him earlier about this. He then meets Vasudhara and tells her about his misunderstanding.

In the upcoming episodes we will see Vasudhara telling Rishi thar he shouldn’t mind even if she goes to the cinema with Sireesh. She asks him one should be limits. Rishi says that she has always poked her nose in his matters to which Vasudhara says that she was always in limits ahd knew what to say. Rishi sees Mahindra and Vasudhara talking. He asks her whether she is done complaining about him but he sees tears in her eyes and asks Mahindra as to what did he say to Vasudhara.

How does Rishi react to her answer? What did Mahindra tell Vasudhara?