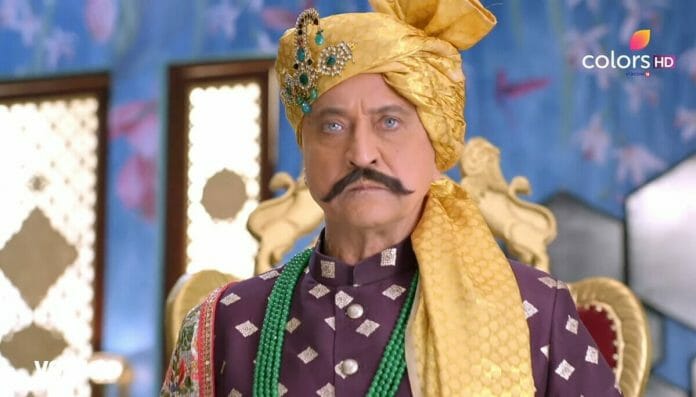 Shagun Sharma and Zebby Singh starrer Colors show Harphoul Mohini never failed to engage audience with its gripping storyline. This is the story of Malayali girl Mohini and Haryanvi boy Harphoul. Now, Balwant gets arrested so it will be interesting to watch that what going to happen in the future episodes.

Earlier it’s seen that, Balwant got shocked seeing cops there. SP introduced himself to Balwant. Mohini told him that Balwant stole dispensary funds and set off fire on the dispensary building. Balwant asked them to bring proof against him to arrest him.

He told Banwari to do something. Later, Villagers gathered in Maai’s house for Matarani’s Jagrata. Harphoul and Mohini put ‘chunri’ on Matarani’s idol. They beginned the Jagrata. Mohini informed Harphoul that SP got search warrant to search Balwant’s house.

Meanwhile, Balwant got ready. He told painter to make his portrait. SP and his team reached Balwant house. SP showed search warrant to Balwant. He ordered his team to search the house. Balwant praised the courage of SP. Cops found nothing.

Balwant taunted SP. Sharda offered laddu to SP. Mohini told Harphoul that SP did not call her yet. She wondered that if SP got anything against Balwant. Harphoul asked her to believe the God. He told her that he is sure that SP will find proof against Balwant.

SP broke the laddu in tension. He read the chit which stated that secret has been hided inside the mud. He returned and he got ready to dig the mud. Balwant opposed him.

In the upcoming episode, SP will arrest Balwant. Balwant will tell Maai that he will return to kill Harphoul.

Will Balwant return from jail? What Maai will say to Balwant now?