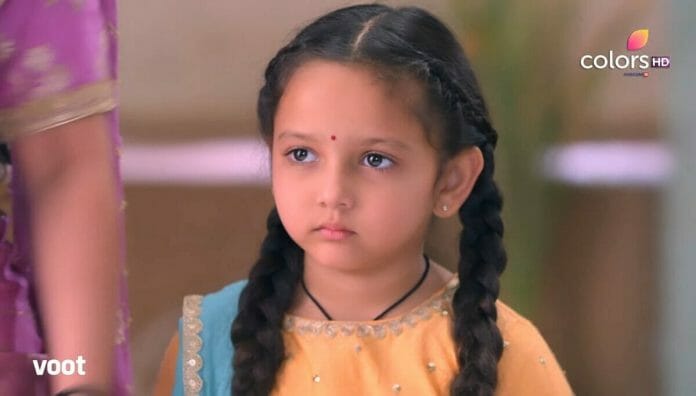 Shagun Sharma and Zebby Singh starrer Colors show Harphoul Mohini never failed to engage audience with its gripping storyline. This is the story of Malayali girl Mohini and Haryanvi boy Harphoul. Now, Mohini and Harphoul brought Devi to house so it will be interesting to watch that what going to happen in the future episode.

Earlier it’s seen that, Shalini tried to overhear Mohini and Devi’s conversation so Devi made Shalini deaf for few minutes. Police inspector came there and said that he received complaint of Harphoul and Mohini stealing a kid. Mohini told him that she found Devi in the temple. He said that Devi should be in police custody and he took Devi with him.

Harphoul took Mohini to police station. Shalini informed everything to Balwant. Mohini told Harphoul that she won’t leave without Devi. Harphoul asked her that why she is attached with Devi this much. Devi came out of the police station.

Mohini hugged her. Police inspector told Harphoul that lady constables went to commissioner office for urgent meeting so they can take Devi with them.

Later, Harphoul’s family gathered to eat dinner. Harphoul said that he is not hungry so he just wants milk. He got angry learning that Devi drank all the milk. Devi made him eat lot of food. Balwant called Shalini and asked her to do a thing.

In the upcoming episode, Harphoul will tell Mohini that he can’t forget that how Devi came out of watermelon. They will be shocked seeing Maai there. Shalini will give milk to Devi.

Did Maai heard everything? Did Shalini mixed anything in the milk?