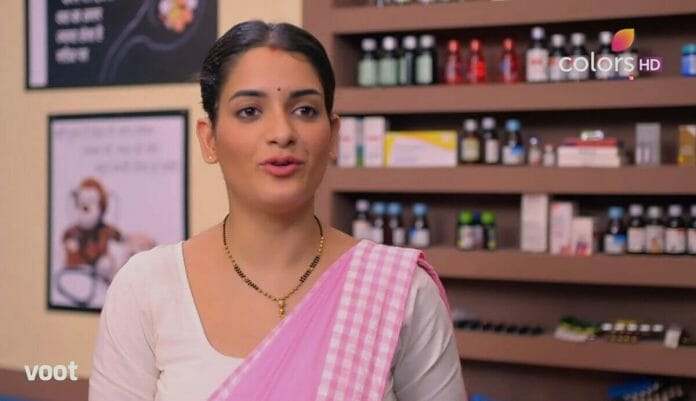 Shagun Sharma and Zebby Singh starrer Colors show Harphoul Mohini never failed to engage audience with its gripping storyline. This is the story of Malayali girl Mohini and Haryanvi boy Harphoul. Now, Devyani failed to stop the inauguration ceremony of the dispensary so it will be interesting to watch that what going to happen in the future episodes.

Earlier it’s seen that, Mohini asked Prabha to listen her point once. But Prabha don’t gave chance to Mohini. Devyani asked Meenu that if the latter will take responsibility if anybody died due to Mohini’s treatment. Villagers said that Mohini is not a doctor so they can’t let her treat them. Maai scolded them for not trusting Mohini. Mohini promised to not do anything which she should not do.

Balwant’s men throw dispensary board saying that they don’t believe Mohini. Harphoul caught the board. Balwant enjoyed seeing all the chaos. SP stopped the fight. Balwant’s men escaped from there. SP told Prabha that Mohini gave interview to district doctor. Doctor informed Prabha that he assigned Mohini to work in the dispensary and doctor will be assigned there soon.

Prabha scolded Devyani and left from there. Mohini opened the dispensary. Harphoul told SP that the latter taking credit without doing anything. He challenged him to win in the kabadi match.

SP accepted the challenge. Later, Harphoul and Mohini discussed about SP. Mohini told him that she started liking Haryana and Haryana people.

In the upcoming episode, Banwari will inform Balwant that the evidence against the latter in the dispensary was destroyed in the fire. Other side, Abhimanyu will give few papers to Maai, saying that Mohini found them in the dispensary when cleaning.

Will Balwant get bail? What is there in those papers?