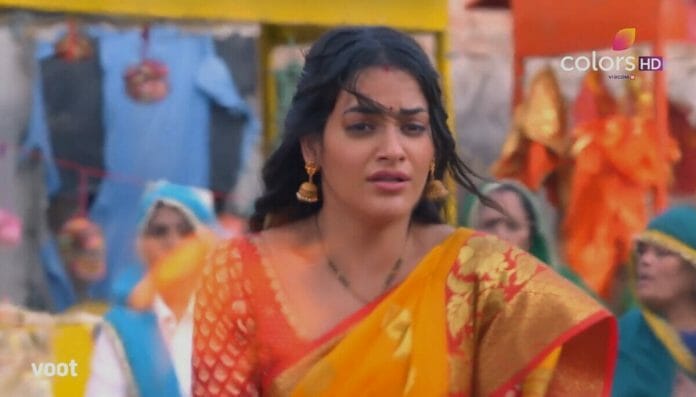 Shagun Sharma and Zebby Singh starrer Colors show Harphoul Mohini never failed to engage audience with its gripping storyline. This is the story of Malayali girl Mohini and Haryanvi boy Harphoul. Now, Mohini gives birth to watermelon so it will be interesting to watch that what going to happen in the future episode.

Earlier it’s seen that, Balwant’s men tried to kill Mohini by set off fire on her. But divine power protects Mohini. Villagers got shocked seeing that. Later, Balwant told Villagers that evil soul entered into Mohini’s body so they have to kill her before she kills them. Villagers agreed with him. They went to Mohini’s house. They barged into the house. They threatened to kill Harphoul.

So Mohini left with them. They got ready to throw stones at her. She got afraid seeing that. They throwed stones towards her. But divine power protected Mohini again. Villagers got beaten up by stones. Harphoul took Mohini from there.

He told her that he will drop her in the Kerala. He reached railway station and hided seeing Balwant’s men there. Balli ordered his team to search Mohini. He said that Mohini should not escape today.

In the upcoming episode, Mohini will ask God that how can she gave a birth to watermelon. She will tell God that she is not understanding that what’s happening with her. She will keep the watermelon before God idol. Watermelon will get broken and a girl child come out of it.

How Mohini will react now? Where is Harphoul?