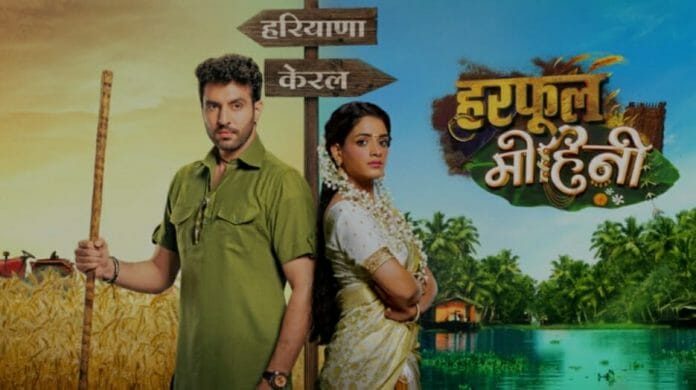 This week Harphoul Mohini begins with Mohini and Harphoul decides to test the second sign of love. SP asks Balwant about his stay in the cell. Balwant tells him that he is not scared of anything because he makes sure that his enemies suffers more than him. In the kitty party, Mohini wins the first round and she picks Harphoul’s favorite soap as prize.

She hallucinates him. She tells herself that second sign of love has been tested too. Meanwhile, Harphoul hallucinates Mohini in the market. He tells himself that he is missing Mohini so much. Devyani asks Mohini that if the latter celebrating Balwant’s arrest like this.

Meenu asks her to enjoy the party instead of fighting. Ragini talks about dispensary opening. Meenu and other ladies asks Mohini to work in the dispensary. Mohini tells them that she will think about it.

Balwant enjoys luxurious imprisonment. Mohini meets SP when returning to her house. SP talks about making kabadi team. He drops her at her house. Harphoul buys coffee packet for Mohini. Devyani meets him. Later, Harphoul enters the house with bangles and flowers. Mohini says that those things are so beautiful.

He throws them away in anger. He recalls that how Devyani gave bangles and flowers to him. He tells Mohini that he is not a man of the house anymore according to villagers. He says that she want to be the man of the house, that’s why she decided to work in the dispensary without asking him.

Devyani asks Shalini to make a video of Harphoul and Mohini’s fight and sent it to her. Harphoul tells Mohini that he won’t give her permission to work. Mohini asks him that why she will ask permission from him. She tells him that she is his wife not his toy. He warns her to not raise her voice in front of him.

Maai orders Mohini to work with Harphoul in the farm from tomorrow. Shalini records everything and she sends it to Devyani. Balwant enjoys seeing that video. He asks Bhaai ji to save him. Next day, in the farm Mohini gets drenched in the rain when trying to stop the water flow.

She cries saying that she is useless. Shalini injures her hand to stop Santok from using her phone. Harphoul tells Mohini that she need not to cry over such a small thing and he starts working. She tells him that Maai sent her to work. He asks her to watch and learn. He talks about paying rent to his own farm and challenge. They returns to house.

Maai asks Mohini to get change. Mohini notices Shalini’s injury. She applies ointment on her injury. Maai tells Mohini to keep her leg on hot water. Harphoul says that he is tired and he want special treatment. Maai tells him that Mohini is not habituated to work in the farm.

She asks him that if he can’t go to kitchen to get water. She says that he gives food to other people to live and Mohini saves other people’s life so both work are same then why he is not allowing Mohini to work. He tells her that he don’t want to eat from Mohini’s earning.

She asked him that why he did not deny to eat from her earning. He tells her that everyone will make fun of him. She asks him to give a befitting reply to them. She reminds him that Harveer fought against everyone for her.

Next day, Harphoul talks to Vijayan about Mohini’s work. He apologizes to his friend for pushing him in anger. He talks about inauguration of dispensary in front of his family. Mohini refuses to forgive Harphoul. Harphoul criticises her attitude.

She tells him that he always judge her emotions. Balwant thinks to separate Harphoul and Mohini permanently. Banwari learns about the inauguration ceremony of dispensary. He tries to meet Balwant but fails. Mohini cries recalling the difficulties she faced to become a Nurse and Harphoul’s words.

Maai gives food to her saying that the latter can’t stay hungry. Mohini asks her that when Harphoul will understand her. Maai tells her that Harphoul changing and it’s just a beginning. Mohini talks about onam festival. Harphoul overhears their conversation.

Next day, Mohini buys medicines. She talks to her sisters on a video call. They asks her about onam celebration. She lies to them that Harphoul arranged everything for her. She reaches the house and gets surprised seeing the decorations. Shalini asks her that if they are wearing the right onam outfits.

Mohini compliments them. She learns that Harphoul arranged everything. Harphoul apologizes to her and she forgives him. Mohini comes out after getting ready. Harphoul gets mesmerized seeing Mohini in onam outfit. Maai blesses Harphoul and Mohini.

Later, Harphoul’s vesti gets loosen so Mohini helps him. Mohini talks to her family on a video call. Vijayan tells Harphoul that he is so proud of him.

Banwari informs Balwant about dispensary inauguration. Balwant calls Shalini but no response from other side. Harphoul’s family dances with Mohini. Mohini thanks Maai and Shalini for making onam special dishes. She serves everyone.

Harphoul feeds her before he eats. She learns that he missed her on kitty party day. Balwant tells Devyani that Mohini should not get succeed in opening dispensary in the village. He asks her to ruin Mohini’s reputation. Mohini gets worried thinking about dispensary inauguration. Harphoul tells her that he is with her.

In the upcoming episode, Mohini will tell Maai that, this dispensary will be beneficial for villagers. Officer will tell Devyani that it’s about villagers life and she won’t let any illegal thing happen in the village. Later, Mohini and Harphoul will get shocked seeing something burning.