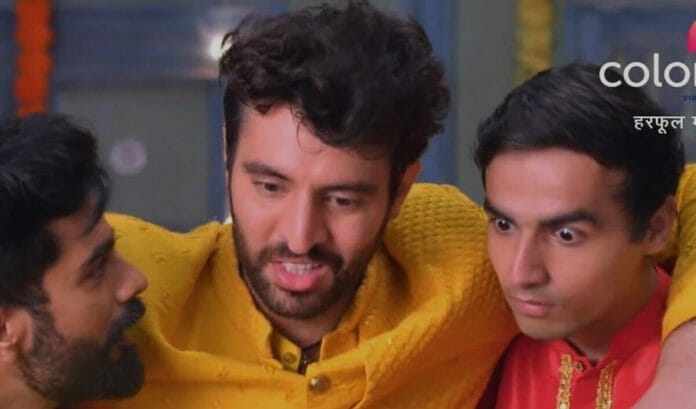 Shagun Sharma and Zebby Singh starrer Colors show Harphoul Mohini never failed to engage audience with its gripping storyline. This is the story of Malayali girl Mohini and Haryanvi boy Harphoul. Now, Balwant gets arrested so it will be interesting to watch that what going to happen in the future episodes.

Earlier it’s seen that, SP found proofs against Balwant. Balwant tried to call someone but SP snatched the phone from him. Balwant asked him that if the latter don’t worry about his family. SP told him that he will show his real house to him. He handcuffed him. He dragged him from there.

Balli and other people broke the mirror of police jeep. Balli told SP that they won’t let Balwant take from there. Harphoul came there playing drum. He danced in front of Balwant to annoy him. Balwant told Maai that he will return to kill Harphoul.

Balwant’s mens blocks the road with stones. Harphoul and his friends cleared the road. SP took Balwant from there. Balwant thought he will ruin Harphoul’s family for sure. Later, Meenu told Mohini that Harphoul looks happy when he is around Mohini.

Harphoul and his friends discussed about Balwant’s arrest. Mohini and Harphoul argued that who is stronger in between ladies and mens. They glanced each other when doing work. They helped each other. Later, Harphoul recalled the moments he shared with Mohini. Mohini danced in her room.

What will be Harphoul’s reply to Abhimanyu? What Mohini will say to Meenu?