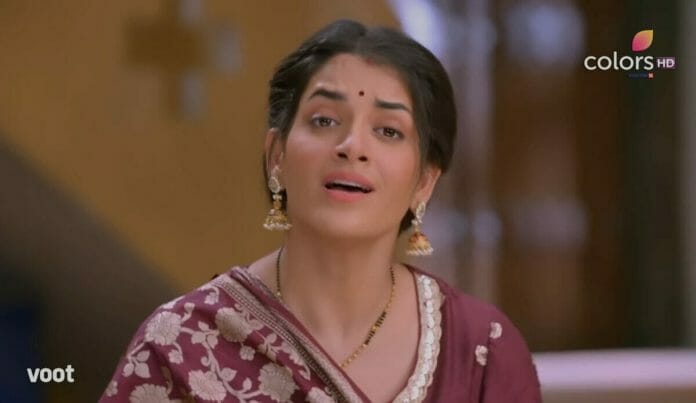 Shagun Sharma and Zebby Singh starrer Colors show Harphoul Mohini never failed to engage audience with its gripping storyline. This is the story of Malayali girl Mohini and Haryanvi boy Harphoul. Now, Balwant executing his plans to distract Mohini so it will be interesting to watch that what going to happen in the future episodes.

Earlier it’s seen that, Harphoul was about to drink Mohini’s coffee so Mohini told statue to him. So he stopped moving. Maai asked Mohini that what happened to Harphoul. Mohini explained her about statue game. Shalini said that this time she will win best daughter in law title.

She told the dishes names which she is going to cook in the competition. Harphoul told Mohini that everyone preparing so much for the competition but the latter don’t even know the names of the vegetables. Mohini left with Santok to the market.

Surendra told himself that he don’t have courage now but he will kill Balwant one day for sure. Sharda told Surendra that they can’t do anything to Balwant. She told him to inform Maai that dispensary already exists in the village.

Balwant said that Mohini inspired him to bring mobile dispensary to their village. He announced that body check up is free for everyone. Surendra met Maai but he hided seeing Shalini coming there.

Mohini told Balli that she want to get free body check up. Balli told her that today’s appointments are over. Balwant told himself that he won’t let Mohini concentrate on dispensary.

In the upcoming episode, Balwant will think to use Kaki as pawn to distract Mohini. Other side, Mohini will tell Kaki that she will cook food for her one day.

Will Surendra try to meet Maai again? How Balwant going to use Kaki as pawn?