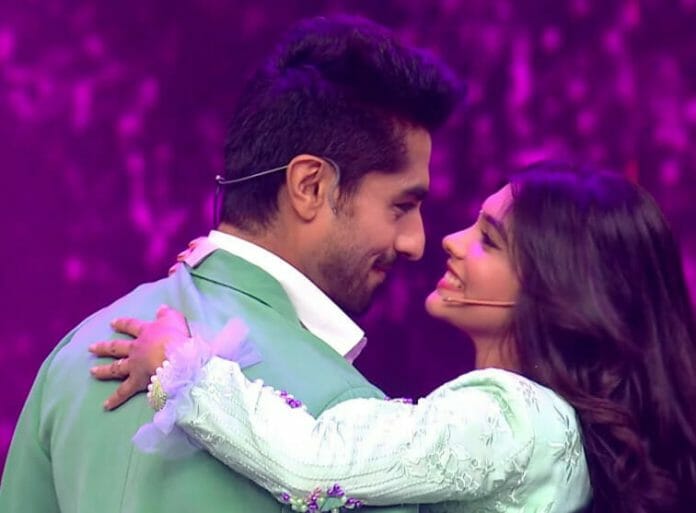 Soon Yeh Rishta Kya Kehlata Hai triology and Jodi of Abhira will hit one successful year. In short span Abhimanyu and Akshara locked millions heart. Each day both are celebrated on social media. Abhira skips the beat daily with their performance in the show. All the emotions portrayed by the couple seems real and relatable.

Romantic AbhiRa is everyone’s favorite. In the upcoming Ravivaar With Star Parivaar, AbhiRa along with other popular jodis will perform a romantic dance on singer and host Amaal Malik’s song.

The twirl and eye-lock of AbhiRa has a separate fan base. Fans are fan of Harshad twirling Pranali with one hand. In the upcoming episode the current best TV couple will turn the screen conducive with their love and romance. Check out:

Talking about Harshad and Pranali upcoming look both are color coordinated in mint green attire.

Harshad and Pranali as Abhimanyu and Akshara are giving jaw dropping performance.  The post leap episodes are interesting audience. Harshad as usual rocking hearts by his stellar performance. Pranali is receiving equal praise of nailing the character of Akshara. She is receiving positive response for acing the emotional scenes. Her angst in the recent episode received applauds. She is a rising star undeniably.

Pranali growth as an actor>>> Her face is soo pretty but her potray in badass scene In emotional scenes i was just going gaga with her expression. Girl deserve appreciation

Pranali how do u manage to get right everytime? Da mild shock,,da comprehension,da realisation,n finally da guilt. Aced it! Without many words bt only expressions,, u succeeded in making me feel every emotion with Akshu #yrkkh #PranaliRathod #AksharaBirla #Akshu #AbhiRa

Share with us if you all liking the current episode of the show!

Additionally, the star cast of Yeh Rishta Kya Kehlata Hai gathered to bid adieu to Lord Ganesh. Shivangi Joshi made her presence too on the sets of the show.