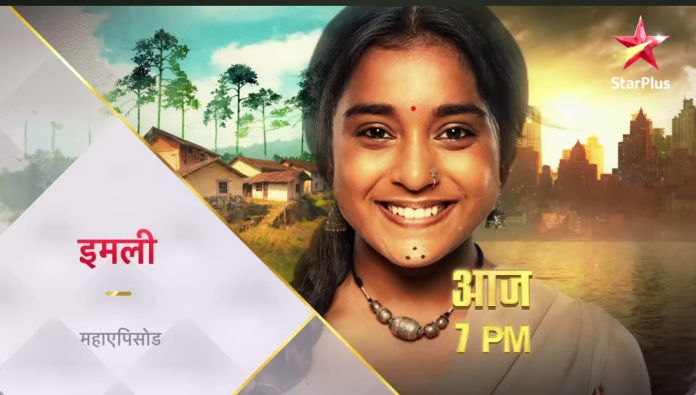 The episode starts with Imlie sitting on the jhula. Jyoti pulls the rope and Imlie falls down. She falls unconscious and Aryan holds her. Arpita calls the ambulance but Aryan says that will come late so he picks Imlie up and takes her to the hospital. Doctor tells Aryan and his family that Imlie is fine now and when they ask about the child, doctor says Imlie is not pregnant. Aryan says how is it possible as Imlie tested her pregnancy at home with the kit. Doctor says that can be false and those tests are not always correct. Narmada says if that’s false then your test can be false too. Doctor says for their satisfaction she will test again.

Gudiya gets happy and says finally she got a good news, Nila tells Jyoti she did a good job, Jyoti says she told them already that what will happen next, will be good for them. Imlie gains conciousness and Aryan kisses her hand. She asks about Chiku and he diverts the topic. Doctor comes and reveals Imlie is not pregnant and that’s the truth. Imlie breaks down to tears and Aryan says they have chances to become parents in future so she should not be upset.

Doctor further says Imlie is infertile and she can never become a mother. Everyone gets shocked to hear that and Imlie cries hugging Aryan. Jyoti smirks and recalls how she showered money on the doctor and told her to lie to the family. Jyoti asked for medicines which will prevent pregnancy so doctor said her profession doesn’t allow her to lie to her patients. Those medicines are harmful. Jyoti choked her and said if she can’t give her the medicines she will kill her.

Imlie looks at a couple who are playing with their kid. She gets emotional and Aryan comes to her. She says she snatched the happiness from him of being a father. She wronged him. He stops her saying she didn’t hurt him or snatch anything from him. They won’t lose hope. They will conduct the test again as these tests results are not appropriate all the time.

Later they can think of other ways to become parents, there are other ways too. He consoles Imlie and asks her to believe in Sita Maiya. They hug each other. Aryan sheds tears and she says she knows him, he is equally shattered after getting the news but she will make sure he stays strong. She won’t let him fall apart.

Narmada says at home that now Aryan can never become a father, Arpita says we should not talk about all these in front of Aryan and Imlie as they are already sad. Nila asks now how will they get their heir and who will carry forward their ancestors’ names. Arpita says if she wants child then she can be happy seeing her and Sundar’s child. Nila says but that would be wrong as Sundar is a servant technically. Arpita requests her not to bring this topic in front of Aryan or Imlie.

Aryan comes home and tells Sundar that today he will cook with him. The ladies will take rest. Aryan decides to make french fry and chocolate shake. He teases Arpita and the latter also teases him. Aryan asks Imlie to focus on her work and sends her to make reports.

Nila again provokes Narmada saying she must have that wish to become a grandmother and she wants to hold Aryan’s child. Narmada says but that’s not possible now. Nila talks about Jharphook saying her one relative’s wife got pregnant after performing this superstitious ritual. Sure Imlie will also get pregnant if they apply this process on her. Narmada gets convinced.

Gudiya asks Nila why the latter gave ideas to Narmada. Nila says she did it because Imlie will refuse to support any such ritual and Narmada will get angry. Narmada will find flaws in her horoscope and will ask her to leave the house.

Precap- Narmada tells Imlie to leave Aryan as she can’t get pregnant.