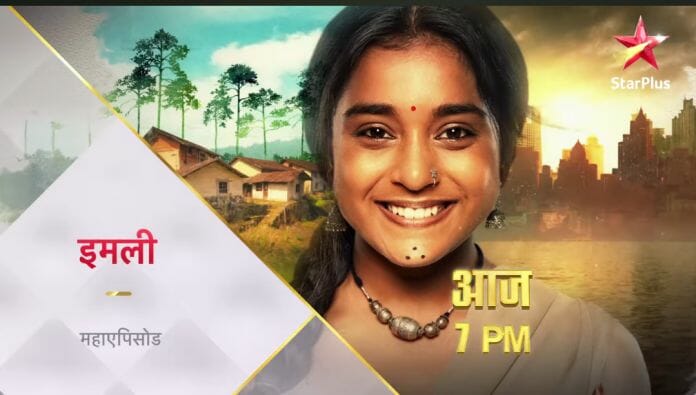 The episode starts with Narmada telling Imlie that if she can’t get ready to perform the ritual then she should be ready to divorce Aryan too. Imlie forcibly goes to the Babaji again. Babaji asks her to cut her hand. Imlie takes the knife and gets scared to slit her hand. She then gives the knife to Babaji saying she only know how to cut vegetables and the latter must have idea how to do all these so he can show her by cutting his own hand. He tells her to stay away.

Imlie gives the knife to Nila and asks her to do it but Narmada scolds Imlie saying why is she wasting time and not thinking about the respect and happiness of her in laws? Imlie says if she had idea before that she can’t become a mother she wouldn’t have married Aryan. Its Sita Maiya’s decision so she has to accept it. But she always thought this pain should be hers only and this should not cause pain to others. Nila says her they don’t want to hear her lecture but her actions.

Nila forcibles makes Imlie sit and tries to cut her hand. Aryan talks to Arpita regarding Imlie and says he just wants to focus on Imlie right now as she is more disturbed. Arpita says Aryan should never change himself, he should keep loving his wife. Aryan gets a call and learns something shocking. Later he reaches Babaji’s place and interrupts the ritual by breaking a pot. He asks Imlie if she is fine? Narmada asks him what he is doing here? Why he stopped the ritual in the middle. He asks her back does she have idea what she was trying to do! She forgot logic and science everything.

Narmada says Aryan should not question her faith. She just told Imlie to give her blood. Aryan says if she asked for Imlie’s life Imlie would have sacrificed her life for her but thankfully Narmada didn’t do that. She lost trust in her son. He says if they need someone’s sacrifice then Imlie wont be the person but he will cut his hand.

Aryan tries to cut his hand and Narmada throws away the knife. She kisses his hand and cries saying have you lost it? He says your words hurt me more today. Nila says to Aryan Imlie has flaws not you. Aryan replies if someone can’t do something like the other person that doesn’t mean she/he is incapable. If Nila cant become a businesswoman, it doesnt make her a useless. Aryan thanks Jyoti for giving him information else he would have failed to save Imlie. Jyoti says its her duty to protect them from negativity.

Aryan and Imlie get angry at each other at home. They tell each other they would have been injured. She hugs him and he says she has to promise she wont doubt herself just because people are talking rubbish about her. She says but the truth is she can’t give him a child, or a heir to this family. He shuts her up saying you are a donkey. He makes her sit and writes on a stamp paper that he will never leave her alone in difficult times. He will love his wife always. Imlie asks him if he leaves her then what ?

He says then he will give her foot massage, she adds he has to give her head massage on every Sunday and has to do the laundry on alternate days. He agrees. They smile. He tells her the future journey will be tough for them as not everyone will understand their bonding. Narmada will be confused, Nila won’t support them. Imlie says but Arpita and Sundar support them always. He says they will be the support system of each other.