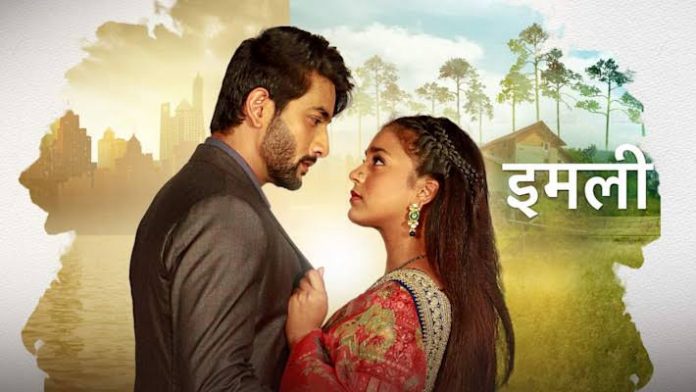 The episode starts with Aryan telling Imlie that she should not play with fire. She says she is fire herself. Aryan leaves saying he will make sure Imlie loses this time. Imlie thinks she will become like a mountain and Aryan will not be able to break it. Malini tries to see her phone but Anu tells her to focus on the puja.

Malini tries to take her phone from Anu but in that process her phone falls in the hawan fire. Malini gets angry and Anu apologises to her. Imlie and Aryan try to sleep at night. They start missing each other. Their flashbacks are shown. ( Tujhe Bhula Diya plays in background) They both get emotional. Chini wakes up and hugs Imlie. Imlie makes her lay in bed.

Meethi combs Chini’s hair and the latter says she wants to eat something tasty, Imlie asks her what does she want to eat? Chini says she wants to eat pizza and those things which Aryan brought for her. Imlie says those are junk food and Meethi tells her to fulfil Chini’s wish. Chini teases Imlie. Malini scolds Anu for her phone damage.

Anu tells her to marry Aryan as it will stop Imlie from coming back to Aryan’s life. Malini shuts her up saying she just wants to give pain to Imlie as the latter snatched Aditya from her. Malini says she is not interested to marry him but she will just separate Aryan and Imlie.

Narmada calls Aryan and Arpita signals her to ask him about Imlie. Narmada gets nervous and asks Aryan if he met new people in the village. He gets what she meant. He says he met Imlie but he has to meet her again to end all the problems.

Arpita and Narmada get delighted to hear that and sends love for Imlie. Aryan says he still didn’t forgive Imlie yet and he will make sure he doesn’t return back to see her again but he will teach her lesson. Nila and Preeta overhear that and they go to inform Malini about it.

Malini panics hearing that and says she can’t let Aryan and Imlie get united. Preeta get restless and keeps on saying that Imlie’s return will make their lives hell again. Imlie and Aryan’s love story part 2 will start again. Malini tells her to shut up but she says she will find a way.

Imlie asks for pizza ingredients from a shopkeeper but he tells her to pay the debt first else he won’t give her anything. Imlie goes to her boss to ask for her salary but he says he can’t give her that as it’s not in his control anymore. Aryan comes and says he bought the news channel company in Pagdandiya.

Now he is Imlie’s boss and he will give her salary. Imlie says she is an independent reporter and her salary is due here. Aryan says but now this company doesn’t provide jobs to freelancers so she has to first work as per his rules and she will be his employee. Imlie recalls the past moments and leaves. The shopkeeper calls Imlie saying he can give her the pizza ingredients she asked for.

She requests him to fulfil Chini’s wish and finds that the shopkeeper is making fun of her by giving some fake stuffs. He says this is her real place. He insults Chini and calls her unnamed whose father left her. Chini tells Imlie to show courage and this is the right time to show girl power. Imlie slaps the shopkeeper and tells him to not badmouth Chini ever again. They push away Chini and she is about to fall but Aryan saves her.

The episode starts with Imlie telling Chini that they don’t have a father but Satyakam fulfilled the duty of a father to them. They dont need a father’s name. Imlie explains how a father can be like. What will be his nature etc. It reminds Chini of Aryan and she says Aryan has done all the things for her which a father does. Imlie tells her not to take Aryan’s name as he is noone to them.

Chini notices Aryan has arrived with some food. She goes to hug him saying her hero has come. Imlie tells her to come back. She asks Aryan what he is doing here? He says he came here to meet Chini. Imlie says she is doing well and is with her dear ones. Aryan asks who is Chini as who is her father? He controls his anger and Meethi replies Chini is their relative’s daughter whose parents didn’t take her responsibilities so they did.

Aryan takes blessings of Meethi and the latter asks him to have food as he is their guest.  He can’t leave without having food. Imlie questions Meethi in private that why she told Aryan to stay back. Meethi says Aryan cares for Chini and why Imlie didnt tell him about Chini’s father. Imlie says Aryan didnt even call her or Meethi once to know how are they in these five years then why would they care about his feelings?