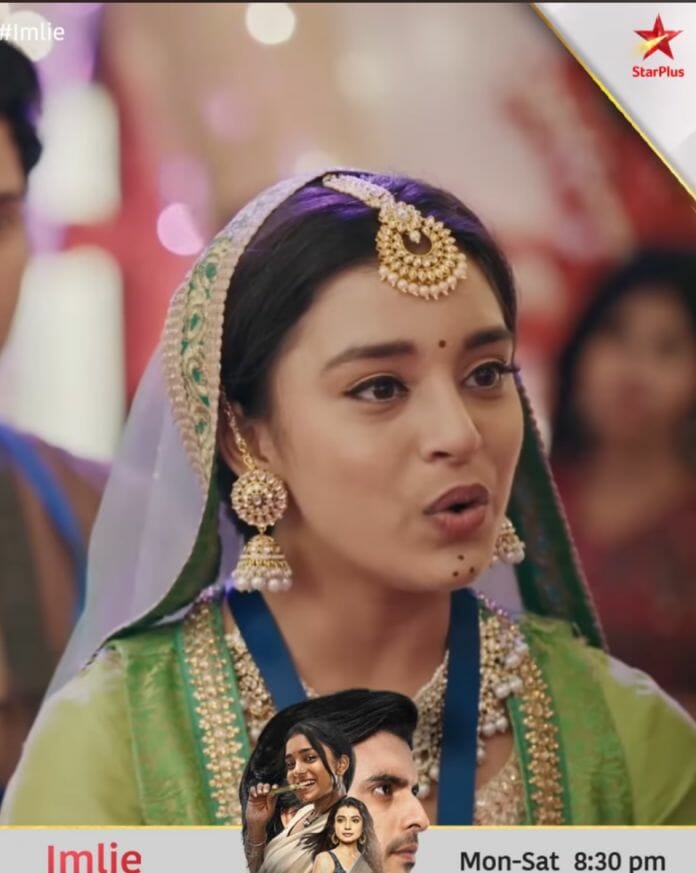 The episode starts with Imlie asking Aparna what happened to which she says they are really in problem. Aditya stops Aparna from revealing anything saying they won’t share their problems with outsiders anymore. Imlie is not a part of their family so he will throw her out.

Aditya drags Imlie from the house and asks her to leave as after the divorce she lost the right of calling his family as her own. Imlie says his words don’t matter as she believes Tripathis are her family and she is here to help them. He cut ties with her but she didn’t want to do that. Aditya makes her understand the difference between blood relations and namesake relations. Imlie says she doesn’t have respect for blood relations anymore. Malini taunts her saying she is also disappointed with blood relations like Imlie. Imlie cheated on her by calling her sister and snatched her husband. Malini says now she cant manipulate Tripathis. She pushes Imlie away and everyone gets shocked. Aryan saves Imlie from falling.

Aryan asks Malini how dare she pushed Imlie. He scolds Imlie for coming here despite receiving taunts from Aditya. Imlie says she couldn’t help it to come here to know what’s the problem. Aditya says she doesn’t need to know that. Aryan reveals what Harish did and Imlie asks him why he didn’t tell her before.

Aryan replies she has not that much money to give them. Harish admits that he brought trouble and he starts crying. Imlie hugs him and says how he dealt with this problem alone. Aditya holds her hand tightly and says she doesn’t need to show sympathy to his family anymore, she can leave as Aryan also told her. Aryan separates Aditya and Imlie. Aditya says he broke professional and personal both relationship with Imlie so she lost all rights to talk to him. Imlie says her family needs his job so for them she won’t accept his resignation letter. She tears it away.

Aryan asks her he is the boss he will decide. Imlie says until tomorrow she can decide being the boss. Aryan then gives scope to Aditya saying the latter can think again about his decision whether to resign or not. Else he will lose this chance too and if he doesn’t care for his family like this everyone will leave him one day. Malini claims that her mom will pay off the loan and get back the house. But Aryan doesn’t need to do favour on Aditya. Imlie asks Aditya he can take money from Malini’s mom but can’t earn money with respect. Aditya says he would like to beg for the house papers but he won’t take help from Aryan or Imlie.

Aryan tells Imlie he is tired of hearing insults for Imlie so she will sit in his car thinking about her worth. Imlie sits and leaves with Aryan. Imlie meets Aparna outside Rathod mansion and Aryan suspects she is meeting Aditya. Aparna apologises to Imlie for Aditya’s rude behaviour and the latter consoles her. Aryan sees them. Malini questions Aparna why she met Imlie at late night.

Aparna replies she met her daughter. Malini says why Aparna doesn’t love Malini like she loves Imlie. She is also like her daughter. Aparna says Malini brainwashes Aditya everytime and she has changed now. Aparna says Anu does favor on them, she don’t help them. Malini feels she will separate Aditya from his family. She can’t stay with them. Aditya learns the papers are not near the people who gave loan.

Precap- Imlie asks Aryan why he bought the 5 crores home. Does he love her