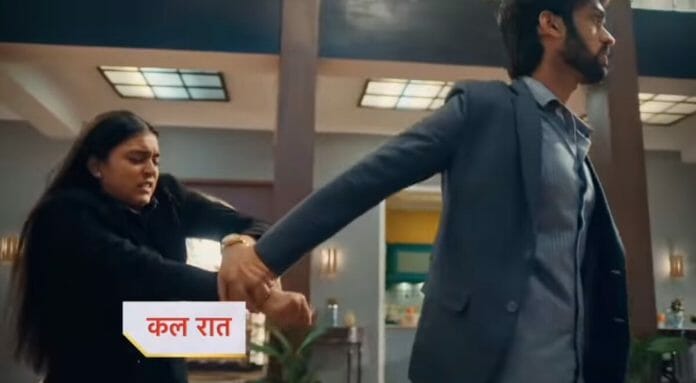 Star plus popular show Imlie will gear up for something interesting. Tripathis are trying to arrange money to pay the debt and Malini taunts Harish which angers Aparna. Imlie reaches Tripathi house but Aditya will misbehave with her out of jealousy. Will Aryan stop Aditya that will be exciting to watch.

Previously it was shown that Imlie reached office being a CEO and she felt like on top of the world. She felt overwhelmed seeing her nameplate on the desk in boss’s cabin. She informed Meethi and Aparna both and they encouraged her to use this one day opportunity and prove her potentiality. Aditya got shocked to know Imlie is the new CEO. He ridiculed her saying without hardwork she got everything. Imlie told him to submit the article on time.

In the upcoming episodes it will be seen that Aditya will give his resignation letter to Imlie and inform his family that he can’t work in a place where his ex wife hurts him with her boyfriend. Aparna will try to make him understand his fault but in vain. Aryan will go to see Imlie is working in the office or not. Tripathis will learn about Harish’s huge debt and there Imlie will also learn from Aparna that something is wrong. She will leave office and Aryan will go to stop her from facing humiliation which will make Arpita realise that he loves Imlie. Malini will blame Harish for his wrong decision of mortgaging the house and Aparna will scold her. Imlie will come to Tripathi house and later Aditya will try to throw her out.