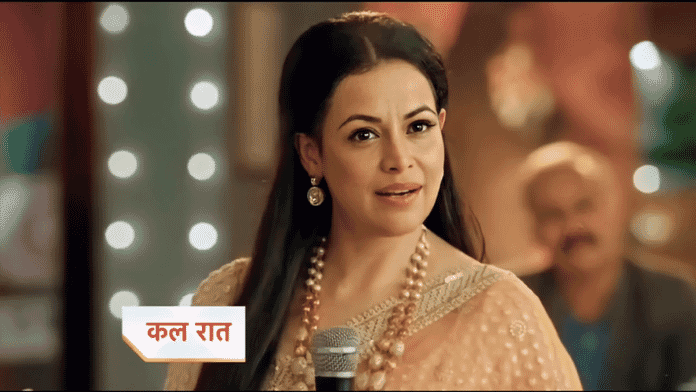 Star Plus show Imlie garnered a huge amount of audience from the date of its launch. The gripping storyline filled with twists and plots makes it engaging to the audience. Now that Aditya has accepted Imlie in front of society people, it will be interesting to watch how Imlie deals with all the issues and proves her worth to win the trust of Tripathis.

Earlier it’s seen how Aditya gave Imlie courage to face the world instead of hiding from them. Aparna invited Malini by lying that Aditya wants her to attend Pallavi’s moo dikhai function. Malini came and Aparna introduced Malini as Aditya’s wife to the guests. Imlie didn’t get ready and made excuse but Aditya told her to be confident. There Kunal got upset to know that Malini broke her promise and still went to Tripathi house. Aparna refrained Imlie from attending party.
Aditya was asked to do the aarti with Malini but he revealed to everyone in the function that Imlie is his first wife and he and Malini got separated. In return Tripathis received taunts from the guests. Aparna got furious and frustrated. She apologised to Malini for everything and later lashed out at Imlie.

Imlie got heartbroken. Aditya talked to Malini regarding how to convince his family to accept Imlie. Malini promised to help him. She said she shouldn’t have come to attend the party. Later she realised, her suppressed emotions for Aditya is stopping her from doing good for Imlie.

In upcoming episodes viewers will see how Imlie will make Aditya understand that ignoring the society taunts can not be a permanent solution. Neighbours will taunt Aparna and will tell her to include Imlie’s name in best daughter in law competition. Imlie will shut them up and will take stand for Tripathis.
In order to prove her worth she will decide to participate in the competition. Aditya will not be happy with her decision. Imlie will register her name in the competition and will talk about winning it. Aparna will tear her ticket and will tell her to go back to Pagdandiya. Pallavi will encourage Imlie.

There Malini and Kunal will get into an argument. Kunal will leave Malini’s case saying she is not interested to divorce Aditya thus, he can’t waste his time. Malini will break down to Anu after that. Anu will become the judge of the best bahu competition and will increase the difficulties for Imlie so that she loses the game. Anu will tell the participants to make continental food instead of Indian food.

Will Imlie win the challenge?

What will Anu do next?