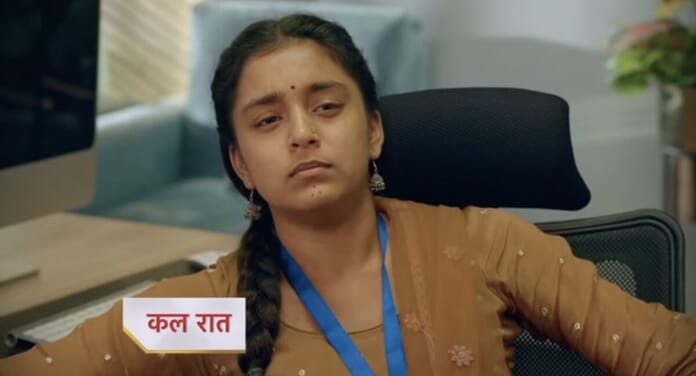 Star plus popular daily soap Imlie never fails to engage audience with its exciting twists and turns. The show revolves around the lives of Aditya, Malini and Imlie. Recently Tripathis accepted Imlie and now Malini has planned something new to get back Aditya. Imlie has started her new life as an individual.

Previously we have seen that Imlie did a blunder again by sitting in Aryan’s chair while submitting her report and he caught her in messy condition. Imlie explained why she interviewed hard working poor women for her report. Her article was published on front page. Imlie got overjoyed seeing that. She thanked the warden who woke her up early morning else she wouldn’t have finished the article. Malini provoked Aditya saying why Aryan is showing interest in an intern.

In the upcoming episodes we will get to see Imlie will bump into Aryan at a temple. Narmada will tell Aryan to accompany Imlie as they both will go to office. Imlie will get afraid thinking about Aryan’s car speed. On their way Imlie will learn that Aryan chose her article over Aditya’s article. She won’t support his decision but Aryan will ask her why does she care for Aditya so much. There Malini will talk against Imlie saying she didn’t even show gratitude to Aditya. Rupy will shut her up saying Imlie is dealing with her own problems alone that’s praiseworthy. In office Aditya will be upset seeing Imlie reaching office in Aryan’s car. Later he will tell Imlie that her article shouldn’t be published on front page this soon. Imlie will be hurt. Aryan will learn Imlie is Aditya’s wife. Imlie will cry in street at night as warden will throw her out.

Will Imlie stop talking to Aditya? Will Aditya trust Imlie? How will Imlie bring Malini’s truth infront of Aditya?