Star Plus popular show Imlie garnered a huge amount of audience from the date of its launch. The storyline is getting interesting with each passing day specially after Aditya’s shocking revelation. Malini accepted that she can’t move on. Malini’s realisation has become a threat to Aditya and Imlie’s marriage. Imlie recently learned about Malini’s intentions and decided to stop her. Will Malini cross all limits to win Aditya’s love? Will Imlie be able to get her rightful place in Aditya’s house? It will be interesting to watch.

Earlier its seen that, Malini taking Imlie’s place in the dance floor and dancing with him. Imlie sees them and thinking that she will dance with him, runs to him. Anu throws glass pieces on her way because of which her feet bleeds. Imlie stubbornly goes to Adithya and forwards her hand towards him. Adithya holds her hand ignoring Malini’s forwarded hand. They both dance with each other. Later Imlie asks Malini to stop playing these petty games to which Malini promises to plan big.

In the future updates, we will get to see Malini throwing something in the dustbin. Imlie comes to her and asks her what is she planning to do. Malini tells her that she has asked her to stop her petty plans and now she is planning something big.

What is Malini’s plan? 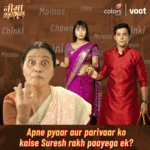