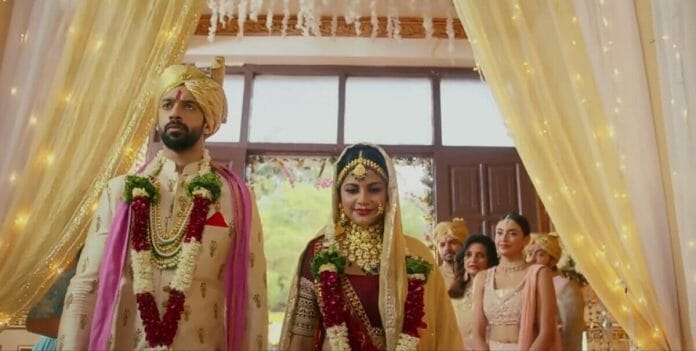 Previously it was shown that Chini tied her own dupatta with the wedding knot and Imlie saw that. She separated her dupatta saying connections are not made forcibly. She put efforts to save her marriage. They got married and Chini got happy thinking Arto is under her control. Later Imlie performed the Vidai ritual and Rathores got emotional.

Narmada also got teary. Atharv left to meet Chini and there she tried to use Imlie’s poem to impress him so that he believes in her lies. Later Divya felt like Imlie can bring bad omen to their family. Devika did not support that thinking.

In the upcoming episodes it will be seen Atharv will be upset that he has to stay with Imlie and Chini will leave him. Chini will fake emotions like she will equally miss him. She will claim herself as the poet of the poem Imlie has written. Atharv will think Chini is the Shayara whom he loved since long.

Later Rana’s will ask Rathores to see Imlie’s welcoming ritual. Chini will gift a Radha Krishna idol to Imlie. Anu will taunt Imlie saying Rukmini was Krishna’s wife but not his love. Imlie will take it positively. Chini will try to leave her footmarks like Imlie at the Rana Mansion but Rudra will tell her to leave as she cant take Imlie’s place.

A bad omen will occur when Atharv and Imlie will perform the post wedding ritual. Atharv will tell his family not to overreact. Later he will meet with an accident and Imlie will be shocked to hear that.