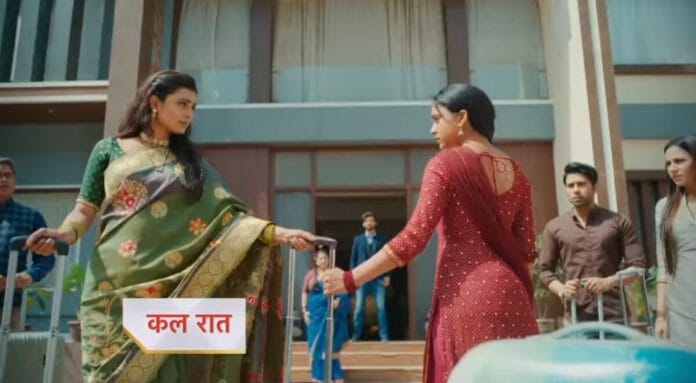 Star plus popular show Imlie will gear up for something interesting. Aryan’s act gives shock to Imlie when he pays off the loan without her knowledge and Aditya misunderstands her all over again. Aryan expresses his anger for Aditya and later Aditya decides to leave Tripathi house with his family. How will Imlie stop them? that will be exciting to watch.

Previously it was shown that Aditya tried to throw Imlie out when she asked about the problem. Malini taunted Imlie and Aditya asked her to leave, saying she lost all rights to interfere in his family matter. Malini pushed away Imlie and Aryan saved her. Aryan told her about the loan. Imlie tore Aditya’s resignation letter saying Tripathis need his job right now. Aryan gave time to Aditya to rethink about his decision. Malini claimed that Anu will pay off the loan but Tripathis objected. Aditya refused to take help from Imlie and Aryan. Aryan told Imlie to leave if she has self respect. Aparna apologised to Imlie on Aditya’s behalf. Malini decided to separate Aditya from his family seeing their love for Imlie.

In the upcoming episodes it will be seen that Aryan will name the house on Imlie by giving 6 crores which will shock Imlie. Aditya will humiliate her as usual and the latter will question Aryan why does he dislike Aditya so much. Why he bought the house for her. Aryan will show his hatred towards Aditya and will tell Imlie to ask her family to live in Tripathi house without fear. She will tell him not to use her as shield to take revenge from Aditya. But he will say he doesn’t have to use anyone, later he will reveal to Arpita what was Malini’s plan thus he bought the house. Malini will be upset knowing someone else has bought the house by giving more money. Aditya will decide to live in Anu’s house for some days. Later Imlie will stop Tripathis from leaving their house.

How will Imlie convince the Tripathis? Will Aryan stop Aditya from misbehaving with Imlie? Will Aditya listen to Imlie?