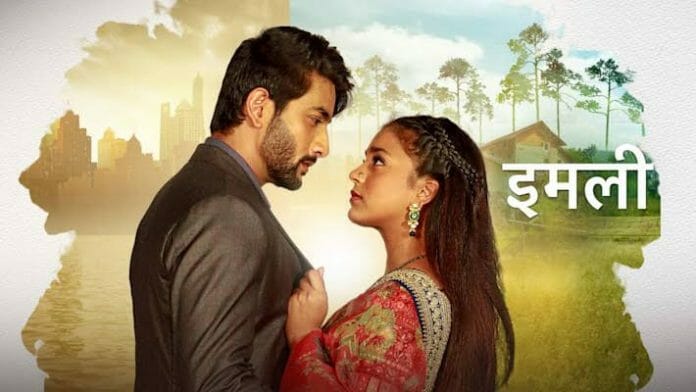 This week begins with Aryan asking why can’t Imlie answer a simple question? He and his family waited for her return for 9 months. Imlie says forgive me! I was in coma so I couldn’t reach all of you. Aryan says then why she opened her eyes after his arrival immediately. Imlie says that’s a coincidence.

If he has so many questions then why he let Malini throw her out? Aryan says she should not take stress in this condition but she should go with him, she can trust him he will look after her. Imlie says just how he trusted Malini that she can steal Chini from her.

Imlie adds he feels now she can’t take care of her own child? Aryan says if she is not alone then where is her baby’s father? Why she didn’t take his name yet and blaming him too. Imlie says because he left her alone, he broke their partnership.

It was him who saved her and she started trusting him more than Sita Maiya but then he broke her trust, love everything. Aryan says Imlie cant handle the responsibility all alone.

Imlie says she has other people too in her life and they won’t leave her side like him. He is not a part of her family now. Aryan gets heartbroken hearing that. Imlie controls her tears. Malini tells Chini if the latter is celebrating happiness for Imlie’s return then she should do it properly.

Malini calls some clowns inside. They make faces at Chini and Malini tells them to leave. Malini then scares her saying she will turn Imlie into air just how she turned her into sand last time using magic. Chini gets afraid and Malini tells her to call Aryan right now else Imlie will get the punishment.

Aryan sits devastated and tells Imlie that if he is not her family then what will she tell Chini? Aryan gets Chini’s call and Imlie tells him Chini should not get affected by her decision. She adds she just wants to hear Chini’s voice, she won’t talk.

Aryan turns the speaker mode on and Chini tells him that she needs father and mother both in her life. Aryan asks her why she is saying it all of a sudden? Imlie thinks Chini can’th demand such thing on her own, she is under pressure maybe.

Malini signals Chini to tell exactly what she is saying. Chini says she needs her parents to hold her both hands. She requests him to fulfil her wish. Aryan thinks Imlie doesn’t consider him her family anymore but he loves her. He will stay with that person whom she loves the most.

He will live with Chini. He says yes to Chini for marrying Malini today. Imlie stands shocked hearing that. Aryan goes towards her and says now he has the responsibility to take care of Chini. He kisses on Imlie’s forehead before leaving. Imlie and Aryan both get emotional.

Meethi overhears that asks Imlie why she is not stopping Aryan from leaving. She should stop the wedding of him and Malini. Imlie says she lost him six years ago and now she has no rights over him. Meethi says she will stop the wedding but Imlie stops her.

Meethi says Imlie pretends to forget him but deep down she cries for him, she should tell the truth to Aryan. Imlie says she doesn’t have guts to lose her child again like last time. If Aryan refuses to accept his baby again then what will she do?

She is tired of fighting with Malini. Meethi says but her baby deserves to get father’s and sister’s love. Meethi encourages Imlie to fight for her child’s bright future. She should expose Malini in this way that the latter can’t plan anything again.

Rathores get to know about a wedding and get confused thinking whose marriage it is. Aryan says it’s his own marriage. Preeta assumes he wants to marry her but then Aryan reveals it’s about his marriage with Malini. Everyone is stunned to hear that.

Arpita tries to make Aryan realise that he is doing wrong by choosing Malini but Aryan replies that he is doing it to give a normal family to Chini and Imlie has already moved on with someone else. She is no longer a part of his family. There Malini selects her bridal jewel and asks Chini to get involved into it but the latter demands Imlie which angers Malini.

Preeta and Nila are in shock knowing about Malini’s betrayal. Preeta doubts her self worth and Nila seeks revenge from Malini for making fake promises to them. They confront Malini and she says that she is marrying Aryan just to separate him and Imlie forever.

Preeta finally sees Malini’s true colors and later Preeta and Nila meet Imlie. They choose to support her and also get happy seeing her pregnant. Chini meets Imlie and the latter gets emotional. Imlie agrees to team up with Nila and Preeta to expose Malini.

Malini comes to Mandap to marry Aryan. Chini staples her dupatta to stop her from moving forward. Anu and Malini notice all the recruits of them they hired previously to harm either Chini or Imlie. Those people expose Malini’s scams in the office and crimes one by one.

Preeta and Nila reveal that they gave their numbers to Imlie and she called them here. Aryan and Rathores get shocked to know everything. Malini turns agressive and she blames Imlie saying why the latter has to love everything that belongs to her.

Imlie also reveals how she left Chini alone at the temple. Aryan saves Imlie from Malini’s attack. Malini laughs insanely and calls Imlie as fool for trying to become heroine.

Malini calls Imlie idiot for not knowing the complete truth about her yet. She reveals that how she locked Imlie and Aryan in room to brainwash Aditya and then she left her three months old kid to trap Imlie.

Imlie still found a reason to be happy and Malini felt she became villain because of her. Malini reveals how she even pushed the pram and because of her Imlie lost Chiku. Aryan gets mad at Malini and later he does not get her arrested for Chini’s sake.

Chini clears Aryan’s doubts that she made them drink bhaang that’s why he and Imlie ended up in hut. Aryan understands Imlie is carrying his child. He performs her aarti and welcomes her in the mansion. Imlie thanks Nila and Preeta for their help. Preeta gets emotional. Aryan apologises to Imlie and the latter tells him to not blame himself.

Aryan tells Imlie that he is ice and she melts him with her flame. They share some romantic talk and suddenly Imlie starts having labour pain. Aryan starts panicking and Imlie tells him not to take stress. He takes her to the hospital and she gives birth to a baby girl.

Rathores get delighted and Aryan kisses Imlie’s forehead. Malini takes sleeping pill and her strange behaviour scares Anu. Rathores perform aarti and Imlie Aryan decide to treat Chini and their daughter in equal way. Malini executes a blasting plan for one last time against Imlie before leaving for abroad.

Imlie senses some kind of danger and Malini fits a bomb in the mansion during naming ceremony of Imlie’s daughter. the bomb timer gets activated before Malini could leave. Imlie and Aryan decide names for their daughter and Chini both.

One bomb blasts and Imlie, Aryan tries to save their daughters. Malini gets stuck and fails to escape. She brainwashes Chini against Imlie that the latter never gave her the scope to address her as mother. Imlie now only loves her own child etc.

Malini tells Chini to snatch her rights from the world. She dies. Imlie and Aryan tell Rathores to take care of their daughter and Chini. They die leaving everyone heartbroken.

In future episodes a generation leap will be shown where Imlie’s daughter Imlie will grow up along with Chini. They will have different thoughts about their mother.