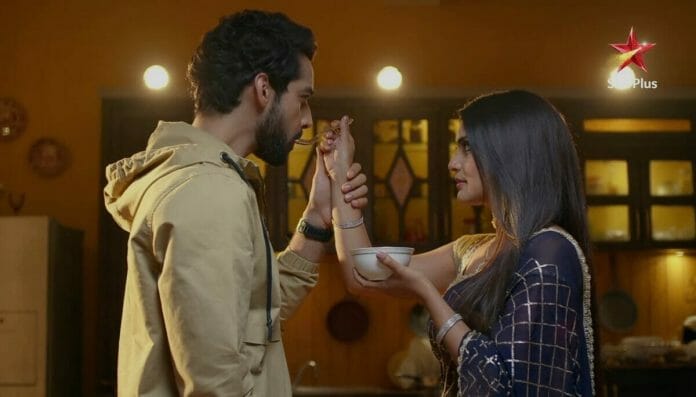 Previously it was shown that Imlie saw Arto with Chini in his car. She waited for them outside the Rana House. Arto asked her why she was not receiving his calls. Imlie threw questions at Chini as to why her nail part was near the fuse box. Chini tried hard to gain sympathy from Rathods and Rana’s. She avoided Abhishek’s call and Rupy talked to him later.

She saw Chini’s text for Arto and confronted her for again going after Arto. Anu appreciated Chini but Rupy asked her to not separate Imlie and Arto this time. Arto tried to explain why he met Chini but Imlie stopped him saying they will part ways soon so they should not get attached.

Later Chini made a pelmet fall on Rupy and lmlie to stop the truth from coming out. She acted like rescuing them. Later Arto thought of telling about Chini’s text to Imlie.

In the upcoming episodes it will be seen Imlie will tell Arto to take his life decision wisely. He will admit that he didn’t understand her value earlier. She will feed him khichdi and he will like the taste. Chini will pretend to cry and will tell Arto that Abhishek didn’t call her to know how is she.

Later she will take Imlie’s place in the dining table. Imlie will sit on the couch and will eat and Arto will also join her. Chini will plan to seduce Arto in her room and there Anu will distract Imlie by giving her a fake call. Meanwhile Chini will get shocked on finding Abhishek instead of Arto.

He will reveal Imlie asked him to come over. Chini will ask him not to involve Imlie in their personal matter and it will upset Abhishek. Later Arto will learn from Imlie that she tried to sort out Abhishek and Chini’s issues. Arto will hope that Chini wont text him anymore.

Later Arto will apply vermilion on Imlie’s forehead by mistake while trying to tease her. Chini will feel jealous seeing them and Anu will give her an idea to kidnap Imlie.

Chini will tell Imlie that first love can never be forgotten. Arto still loves her. Imlie will ask the same question to him and he will get confused.