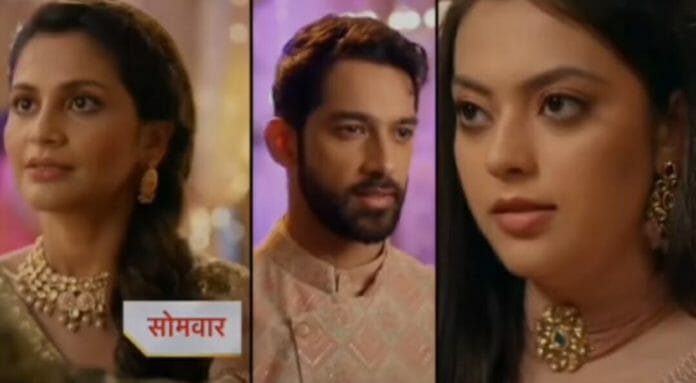 Previously it was shown that Atharv was lost in Chini’s thoughts and Narmada badmouthed Imlie after she returned back. She called her a drug addict and then she threw away her birthday cake and spoilt the arrangements saying Imlie can’t celebrate birthday in her presence. Imlie swore on her parents that she is not an addict.

There Imlie again celebrated her birthday by cutting a new cake. In the meantime Atharv got upset hearing his father’s bad words. Rudra told Devika how he feels Atharv is wasting his talent. Shivani suggested him to get Atharv married. Anu came and blessed Chini. She tried to create misunderstanding but Rupy told Chini and Imlie not to pay attention to Anu.

In the upcoming episodes it will be seen Rathores will attend Parul’s engagement and Chini will receive compliments for her look. She will look down upon Imlie. Atharv will bump into Imlie when she will be carrying mehendi bowl. He will see Chini and will play music to find her. Parul will tell Imlie and Chini that she loves someone else and wants to marry him.

Chini will advise her to elope with him but Imlie will object saying Parul should not humiliate her parents in front of guests. However while everyone will be busy in dancing Chini will provoke Parul to run away. She will spike Imlie’s drink to distract her.

The drink will fall when Atharv will bump into Imlie again. Atharv will talk to Chini about doing something for her. He will ask her to thank him as he helped her. Later Rudra will choose Imlie for Atharv but Atharv will choose Chini for himself.