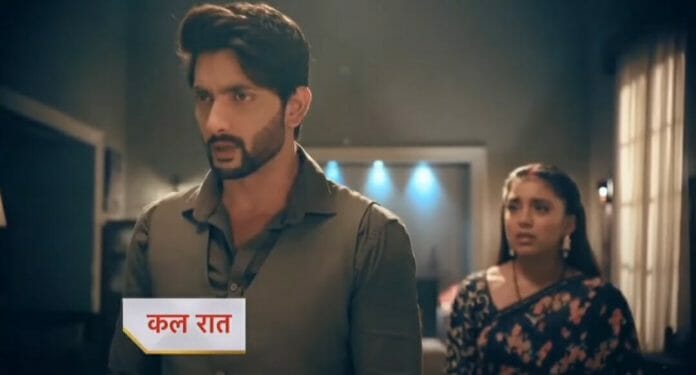 Previously it was shown that Kairi found Jyoti’s sandals and the footprint got matched with it. She tried to find out whose sandals are those. Aryan tried to meet Imlie but Kairi stopped him by dancing around him as it’s impossible for her to turn into Imlie within seconds. Aryan tied her up but talked to Imlie in the room that shocked Kairi.

Later Imlie found Sundar in her saree who confronted her about her double role. She told the whole matter to him. Sundar understood Aryan’s situation but he supported Imlie. Later Imlie noticed that the sandals are missing which she saw earlier.

In the upcoming episodes it will be seen that Aryan will take Imlie to room and will tell her to eat something for her child’s sake, she will not eat saying he should not worry for her as it’s not his child according to him. Aryan will show the sleeping pills to Imlie saying Madhav brought it to make her fall asleep.

Aryan will also tell that Kairi is weird and Imlie will tease him saying noone in the family has problem with her. Imlie will then notice Jyoti’s feet who is wearing the same sandals. Before Imlie could see her face she will disappear. Rathores will do puja as Jyoti kept fast for Imlie and Aryan. Imlie will see that the sandals belong to Jyoti which she identified.

She will not be able to believe that Jyoti can do something like this to her and Madhav. There Aryan will again talk about taking revenge from Madhav after he gets discharged. But Imlie will request him not to call his own child as illicit. Aryan will not get convinced and he will also learn that the particular cctv footage of the store has been deleted.