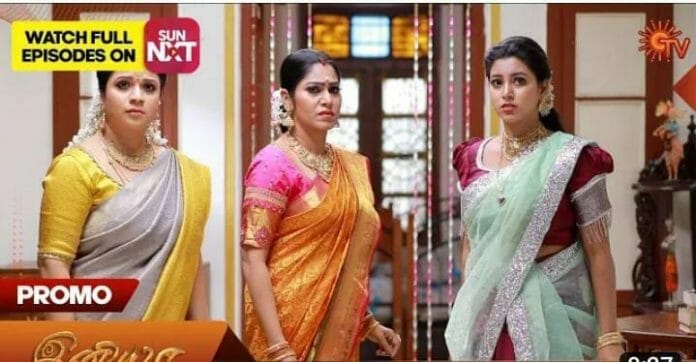 Sun TV newly launched show ” Iniya” is about An Arrogant cop Vickram married an open-minded. Iniya to teach her a hard lesson, while Iniya’s forced to tie the knot out of love for her sister and their mother’s dying wish. Amudhavalli plan to stop Iniya’s engagement

In the previous episode we saw; Amudhavalli planned to stop the engagement using a priest. But Iniya created a drama there to ruin Amudha’s plan. Dhanam got angry on her sister for her flopped plan. Iniya mocked at them for their plan backfired at them. She revealed to them that she found their plan so she asked Gauri to pretended like god possessed her.

Nallashivam will complaint to Vickram that he is changed. Vickram revealed to him that he was acting. Later, Iniya mocked at Amudha for showed their poor acting. She challenged them to plan something better. She mocked at her and leaves. Amudhavalli kidnapped Thiruvasagam and threatened Yazhini to stop the engagement.

In the upcoming episode viewers will see; Iniya to learn the truth. She will seek Vickram help to stop Amudhavalli. Vickram will kidnap Swathi and threaten Amudhavalli to release her dad. She will release her in fear.

What will happen next? Will Iniya fall in love with Vickram?

When Vickram change his attitude?