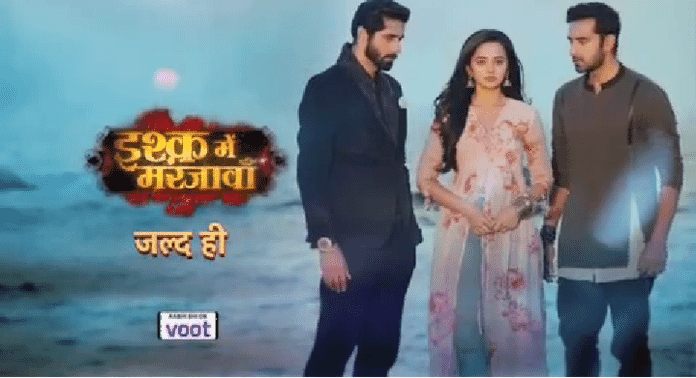 Lockdown in India has been taken off and now we are going towards the unlock phase. As a result slowly even the entertainment fraternity is resuming their work also. Like all the other channels, Colors has aired a promo of Ishq Mein Marjawaan season 2 with the new star cast. Swaragini fame Helly Shah who was last seen in the Star Bharat show ‘Sufiyana Pyaar Mera’ is going to play the role of a protagonist in the show. Along with Helly, Vishal who was last seen in Star Bharat show “Jay Kanhaiya Laal ki”, will play the male lead along with Zee TV Show “Rajabeta” fame Rrahul Sudhir. The channel recently aired another promo of the show which gives an insight about the story line and the character sketches.

So like many TV shows, the promo of the show is coming out as an exception and truly different. The story is going to revolve around three characters, Kabir who is said to be an undercover agent who works for India. Vansh who is associated with some unusual activities and Ridhima, who is a simple girl got played between two rivals. Kabir is a dedicated and committed agent for his country and to keep it safe he can go to any length also he is a doted lover. Whereas Vansh is ruthless and he is a curse to anyone’s life. As per him, he does change the people and their dynamics of life with his presence. This is what the initial promos of the show is telling us about the story and how the show is going to shape up in the near future.

Now coming at the possibilities regarding the show becoming a successful or not so successful on the parameters of TV audience and online audience, the show is produced by Mamta and Yash Patnaik and Mamta Patnaik is going to write the story. Beyond dreams production house are better known for their story telling and unique concepts. Even if they are not show milestone setter on the TRP charts. Each one of their show is popular and immensely loved among the online audiences and youth. Even if the previous season of Ishq Mein Marjawaan was appreciated enough by the online audiences as well as the TRP audiences in the initial years of the show.

The concept of an undercover agent working for a country is not new to the audiences but this concept is definitely one of the most unused ones in ITV. Even if the concept was taken to shape a character, it was never explored the way it should be. Hence the character of Kabir can be one of the most memorable one if handled carefully and minusing the factors that will make him typical ITV Male lead. Ridhima is one happy go lucky girl, who is in love with Kabir hopelessly and takes life as a Pandora’s box which is full of surprises and wonders. She reciprocates her emotions of love in a way which is unlike the taboos of love. Which is again a refreshing change unlike the monotonous pattern we are seeing for years. Vansh is right now the villain of the love story.

However, we never know who is what until and unless the layers of the stories start to get revealed. The show is known for a bunch of surprises and unexpected dark twists. Hence the promo is not what we are going to see in the show and there are possibilities that the entire story can be totally different and unusual. The camera work and cinematography looks fine and the scenes are given a larger than life angle and a cinematic touch to build up the whole suspense. The entire suspense is based on the question that why will Kabir let Ridhima go to Vansh? Is it possible for a person to let his most precious person go near someone else.

However without having much inside regarding the rivalry between Kabir and Vansh. It is impossible to decode why and how he thinks Ridhima as a pawn to get Vansh. The show is going to be bloodshed once again like the previous season, though Indian television never got a female lead as a villian and heroine both. It’ll be interesting to see some unseen and unexpected shade of Ridhima. All in all the show will be a good watch and of course has all the possibilities to gathered audiences if handled carefully from the very start and maintain that. We wish the team and the cast all the very best for their new venture.