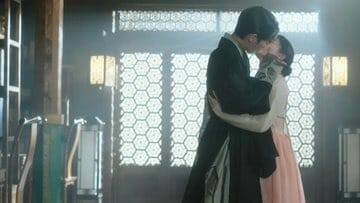 The episode starts with Jang Uk coming to save Seo Yul. Dang Gu learns about Seo Yul’s condition from Bu Yeon and leaves to the gambling ground. Jang Uk swears and destroys Jin Mu’s men nd his main ma confessed that Jin Mu is the one who sent the blood parasite inside So Yi’s body but says they were not aware how it went inside Seo Yul. Jin Mu learns about Seo Yul fighting for his love due to the blood parasite given by him and gets shocked. Master Heo checks Seo yul and finds that the blood parasite is eating on Yul’s energy a nd can’t imagine the pain he undergone during the time period. Heo asks Song rim’s decision to stand with Jang Uk or the Cheongbugwan as this could cause war between the too. Dang Gu immediately sides with Jang Uk while Park Jin gets into thinking. Go Won is discussing with his parents about the upcoming danger that could cost their safety. Queen is sure that even his brother won’t help her in the case.

Jang Uk angrily enters the place for war while Jin Mu summons all the mages to protect himself from Jang Uk’s wrath. Go Won comes there and Jang Uk asks him to let him kill Jin Mu and says he can’t protect him this time. Go Won says that he is not protecting Jin Mu but Uk’s sanity a nd promises to bring Jin Miu to him. Park Jin also comes there extending his support to Jang Uk. Go Won demands Jin Mu to take the responsibility of the blood parasite. The mages also demand him to take responsibility and solve the issue as it was all started by him. Jin Mu agrees and goes to Jinyowon and asks Lady Jin’s help to save Seo Yul. She refuses to help him under any condition but e forces her using the Royal Power. Jin Mu comes to jang Uk with Go Won and Lady Jin. He apologizes for what happened with Seo Yul and Lady Jin reveals that it was jang Uk’s plan to bring her to him. She recalls Ajng Uk requesting her to say the way to destroy parasite and she refused to reveal. She says that she used Jin Mu to get her agree to him. Jin Mu fumes that he got fooled by Jang Uk. She asks him to come to Jinyowon to find the solution.

Bu Yeon feels bad that she hid the truth from others which costed Seo Yul’s life. Lady Heo taunted her for the same. Sun Yi brings Seo Yul’s letter to Lady Heo. Bu Yeon is about to open it but Lady Heo snatches it from her. Dang Gu gives the happy news to Bu Yeon that Seo Yul could be saved. Lady Jin demands Jang Uk to send back Bu Yeon in exchange for the solution and he agrees. She says that the parasite is like an insect and only a powerful bird can get rid of it which is none other than Jinyowon fire bird. Master Heo made the arrangements to save Seo Yul. Go Won also volunteers to help Seo Yul alongside Jang Uk. Jang Uk is surprised by it while Go Won wants to repay for the kindness he showed towards his turtle. Park Jin finds that Jang Uk would send Bu Yeon back in exchange for saving Yul’s life. He suggests to protect both. Bu Yeon offers to help too but Jang Uk turns her down. Master Heo explains that neither fire bird can come out of his barrier nor Seo Yul can get near it. He says that the only way to get through it is using Jinyowon heir. He says that he would transfer the blood parasite with Seo Yul’s remaining energy into Cho Yeon who would use the fire bird to get the blood parasite out of her body. After that she would transfer the energy back to Seo yul but they have very less time for it.

Heo says that they need tons of gold for it and Jang Uk says he has it with him. He shows the tons of gold which he got as reward from Go Won for killing soul shifters. Dang Gu says that Cho Yeon can’t perform as they already got intimate and she might be pregnant. Bu Yeon offers to perform it as there is no way for her to be pregnant. Lady Jin guards Jinyowon while the sorcery is performed. Heo transfers Seo Yul energy into Bu Yeon’s mouth a nd she’s not allowed to speak or swallow it. They reach Jinyowon where Go Won gets surprised knowing that Jang Uk didn’t spend the gold he sent for him. He gets surprised seeing that his Turtle Shaman is Bu Yeon. He explains their connection with Bu Yeon to Jang Uk who gets jealous seeing his care for her. Go won gets rid of the parasite and ties a cloth around her wound. Jang Uk fumes in jealous. Bu Yeon comes in the last minute and directly transfers the energy back to Seo Yul with a kiss. Heo sighs in relief as Seo Yul will be saved.

Jin Mu is furious that Go Won is changing his feelings for Jang Uk and plans something. Go Won leaves inviting Jang Uk to visit the turtle along with Bu Yeon. Jin Mu thanks Go won for saving his life again. Go Won makes it clear that this time he saved Seo Yul and not him. Jin Mu again manipulated him revealing that Jang Uk is the son of late King and so he’s King’s Star. Bu Yeon herself finds out that her mother wants her back a nd leaves angrily as Jang Uk agreed to give up on her. Jang Uk learns from maidservant Kim that Bu Yeon never came back to their place and Kim scolded him for letting go off her. Jang Uk is confused with his feelings towards Bu Yeon as the lamp flickers on and off. Seo Yul wake up after three days and learns about So Yi’s death. Bu Yeon didn’t leave Seo Yul’s place yet and is taking care of Seo Yul. She brings Master Lee who reveals that it was him who saved Bu Yeon. He says that both Nak Su and Bu Yeon’s soul lives in Bu Yeon’s body and soon Nak Su’s soul will leave after Bu Yeon’s soul uses its energy. He asks him to keep it a secret about Nak Su until then. Lady Heo learns that Bu Yeon is Nak Su through the letter. Cho Yeon comes to take Bu Yeon to Jinyowon when Jang Uk comes there. He finally confesses his love to her and kisses her.