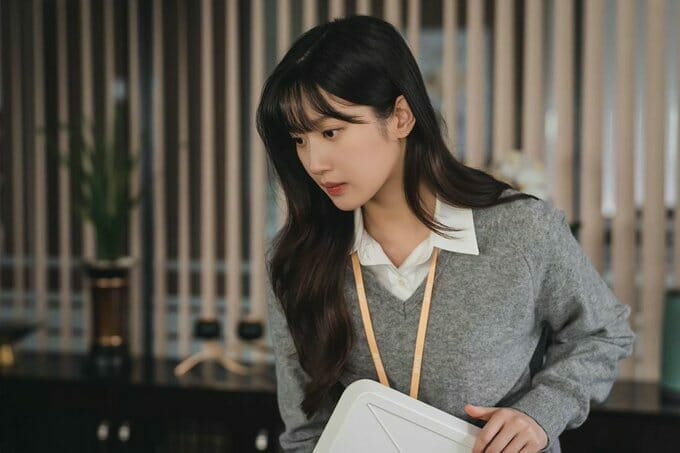 The episode starts with Su young finding a piano at railway station and Sang Su encourages her to play it. She plays a classical melody and says they discuss about it. She says that the musician wrote the music for his wife but they had break up in the end. Su Young says that she’s happy after ages and Sang Su asks if she’s happy. She suddenly asks if she should break up with Jong Hyun. Gil Pyeong and Mi Kyung are at reunion when their old friend who revealed about Mi Kyung and Gil Pyeong’s relationship to Sang Su told about how Sang Su knew about its months back. Mi Kyung gets terrified but Gil Pyeong says that Sang Su is cool about it. Su young come home as Sang Su drops her to find Jong Hyun waiting for her. He says that he would like to start a fresh with her after moving out. He promises to not give up on her too. Mi Kyung meets with Sang Su and tries giving self-explanation. Sang Su says he didn’t mind it which in turn upsets her. She indirectly asks him if he wants to say something to her but Sang Su declines. Su Young is sleeping in Jong Hyun’s arms thinking about Sang Su.

Next day, Manger says in meeting that they o more need to wear uniform and can come in casuals. He asks them to return the uniforms. Sang Su didn’t attend the meeting as he came late. He helps Jong Hyun with the trash when Jong Hyun indirectly hints him that Su Young is his responsibility. Gil Pyeong asks Sang Su why he didn’t ask anything about him and Mi Kyung. Sang Su says the past doesn’t matter but Gil Pyeong finds his response strange. They see Su Young returning her uniform and Gil Pyeong pulled a prank on Sang Su that she’s quitting. Sang Su worriedly stops Su Young bewildered that she’s quitting and confronts her about it. Before she could answer, Mi Kyung and others enter with their uniforms and
Mi Kyung sees them together. He realizes his mistake. Su Young recalls how Sang Su was worried for her. Sang Su felt the difference in Mi Kyung’s behavior and calls her somewhere later. She leaves with him to his mother’s massage center while Su Young and Jong Hyun were having their dinner date. Mi Kyung finds her mother in reception and after series of confusion Sang Su formally introduces Mi Kyung as his girlfriend. It came more as a shock for Mi Kyung’s mother over Mi Kyung. She’s not in favor of their relationship anymore given their financial status but Mi Kyung stands firm in her decision.

Jong Hyun’s date gets interrupted with his student’s call and Su young thinks that it’s a male friend. Jong Hyun didn’t correct it for her and made her believe that the friend is male. Sang Su’s mother asks him to say about his girl friend as he seems to be serious about her. However with the way he explained she felt that it seemed more like a colleague and not girlfriend. Mi Kyung is happy that Sang Su took the first step in their relationship for the first time and says the same to him. However , Mi Kyung couldn’t still be at peace with Sang Su and Su Young’s feelings for each other. Next day, Sang Su finds his newly married friend happily texting someone and thinks that he’s happy with his wife. He then reprimands Gil Pyeong for the prank he pulled at him. Gil Pyeong finds Mi Kyung’s cousin in front of their office and says about it to Mi Kyung.

Mi Kyung and Sang Su are seated with Mr. Yuk in front of Mi Kyung’s father and cousin who is the deputy manger from headquarters. His father is judging Sang Su and Mi Kyung’s relationship when Su Young comes there with coffee. She leaves serving them while Ms. Bae comments about how lucky Sang Su is to date Mi Kyung who comes from such a wealthy family. While leaving it’s revealed that it’s Mi Kyung who asked her father to come there. Her father is not particularly positive or negative about her relationship and correctly guesses that she’s the one chasing after him. She expresses her happiness to Sang Su about their growing relationship. Su Young, Bae and one more colleague is walking but when they find Su Young’s mother making deliveries. Sang Su also passes by their in his car. Her mother got hit by a car and Su Young runs shouting her as mother. It comes as a shock for everyone while Sang Su rushes to help her. Bae says what happened to Mi Kyung who asks her to keep it a secret from others as Su Young would have her reasons to not say the truth. She gets furious upon knowing that Sang Su is the one who took her to hospital.

Su Young scolds her mother and gets her tested while Mi Kyung calls Sang Su to ask about Su Young’s mother. She gets angry when he thanked her for keeping it a secret from others as it’s not his place to do it. Su Young bumps with her father and confronts him the complete truth as her mother is fine physically and her leg issue is psychological one. He doesn’t answer it. She’s waiting in bus stop when Sang Su comes there. He suggests to go for a walk nd takes her to his college campus. He made her walk uphill while reminiscing his college days. He wanted her to clear her mind. Mi Kyung is calling both but both doesn’t pick up. She furiously starts packing some of her clothes. Sang Su and Su Young finds the restaurant that they wanted to visit close and Sang Su drops her home a little bit away and they both decide to meet over a meal later. Su Young finds Mi Kyung at door step a nd asks about it. Mi Kyung says she brought some clothes for her as there is no more dress code. Su Young hides Jong Hyun’s stuff before welcoming her in. Mi Kyung asks about her mother and asks if she came back directly from hospital. Su Young lies yes and Mi Kyung catches her lie. She calls herself in washroom and asks about her relationship with Jong Hyun. She shows of her progressing relationship with Sang Su and also says that marriage is on cards for them.

Once she leaves, Jong Hyun comes home drunk. She puts him to sleep and finds his mother’s message on phone about her struggling to pay the medical bills. She closes her bank account to withdraw the money and also sells the expensive clothes Mi Kyung gifted her to arrange the money. Mi Kyung brought her car to Sang Su for him to accept it but he refuses. After a tiff, she still leaves the car with him asking him to do whatever he wants with it. Su Young gives the money to Jong Hyun and also says that it’s his call to accept it or not. Mi Kyung’s father indirectly forces Sang Su to accept his daughter as he always gets her what she wants. They invite him for dinner. Jong Hyun takes the money swallowing up his pride. Sang Su waits for Su Young in the restaurant but Su Young leaves without entering recalling how he stood up on her the first time. He still chases after her and they do ice skating where they both kisses.