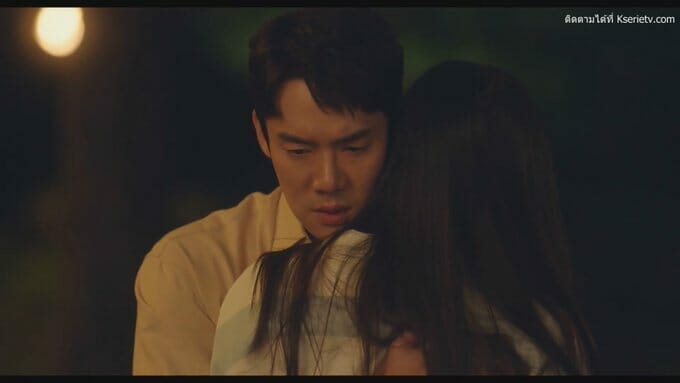 The episode starts with Jong Hyun’s father calling him and asking him to keep his earning for his own expenses. Jong Hyun lies that he has a very luxurious living place given his bank job. He recalls his first meet with Su Young who is the first person to respect him and helped him in the office and how gradually their friendship grows. Sang Su is hugging Su Young when she gets Jong Hyun’s call. Their previous drink partners pass by nd they immediately separate. He asks if he would have reached their date on time would she have given him a chance to date. Su Young hesitates to answer it when others call her and they leave. Their previous drink partners ask Sang Su to set him up with Su Young for time pass till he gets married. However anther person says to him about her rumored boyfriend and Sang Su have no answer for it. Sang Su comes back to find Su Young on call with Jong Hyun and leaves not disturbing her. They both spend sleepless night.

On their return, Sang Su apologizes Su young for making her uncomfortable but Su Young say she was not. She invites him for a talk during dinner and he agrees. Mi Kyung waits for Sang Su to reply her text when Song Hun greets her. She finds him awkward around her and asks about it. Sang Su come there at the time and they discuss about their upcoming mutual friend’s wedding. Su Young comes right after he leaves and Mi Kyung says to her about he expressing her feelings to Sang Su. She asks if they are dating now for which she replies not yet as he’s still considering it. Su Young helps a customer by gifting him a device as his wife as dementia and it could help him locate her if she goes missing. He thanks her whole heartedly. Mr. Yuk calls Su Young for a meeting after office hours and she agrees. Her colleagues badmouth her for having affair with Mr. Yuk but few support her. Su Young is present with Mr. Yuk who’s treating a VIP client to dinner. The client expects her to pour a drink but she doesn’t Yuk himself does it and Su Young starts narrating about their plans. The client gets disappointed at her approach. Yuk also gets angry at her.

Si Kyung announces his friends that he’s getting married with his latest girlfriend. Sang Su calls his decision a rash one but Si Kyung is confident that he could have a better life. My. Yuk scolds Young for being so blunt in her actions. He forcefully pays her for her taxi despite her turning down. Sang Su and Su Young once again have a sleepless night. Su Young throws away the money with the other gift money which she already received by force. Sang Su message Su Young to post pone their dinner plan. Bae gets a picture message of yuk with a girl nd she suspects Su Young to have an affair with Mr. Yuk. Mr. Yuk again invites Su Young for another dinner meeting but Su Young turns it down taking a stand for herself. She says she’s not comfortable with the meeting shocking everyone. An angry Yuk loads her with paper works with a very limited dead line. He also warned that none should help her. Su Young accepts the work over the meeting. Su Young’s colleagues feel bad for her who’s working after office hours. Jong Hyun offers to help but she turns him down. Sang Su also tries to help her but she reminds him Yuk’s words and sends him a way. Sang Su comes out to find a shop and buys food but hesitates to give it to Su Young. Su Young finds meal box in her table but it was left by Jong Hyun.

Sang Su is having the food he bought in his mother’s massage center. They both discuss about marriage when his mother says that she had her fair share of boy friends before settling down for his father. She says it’s not necessary for an intense love for a successful marriage. Mi Kyung is also with her mother who keeps ranting about things but Mi Kyung showed least interest upsetting her. Sang Su ahs gone with Yuk to meet President Park to his golf field. Park invites him for a match and he keeps a condition to consider their proposal if he wins the game. Park agrees and Sang Su deliberately loses the game by helping Park. Park gets impressed with Sang Su and agrees to look into his proposal. Mi Kyung comes there but didn’t pay any respect to President Park and leaves with Sang Su for marriage. Sang Su asks about it in car when Mi Kyung reveals that he’s her father who she don’t have much interaction with. Su Young’s mother calls her and texts that they are closing down the restaurant. Sang Su imagine the bride as Su Young.

Mi Kyung’s friend Sang Hui gossips about the wedding couple and Mi Kyung asks her not to comment bad on their big day. Offended by her straight forward response Sang Hui calls Mi Kyung the privileged one who stole the scholarship of hard-working people. Sang Su feel bad foe her but Mi Kyung leaves. He reprimands Sang Hui and asks he to apologize Mi Kyung later. Mi Kyung gets her mother’s address from the restaurant owner but returns without meeting her . Her mother notices her. Mi Kyung gets a drink from Sang Su and shares how all her hard work goes unnoticed under the name of privileged despite working hard. Sang Su drops her and buys her a hangover drink too. Su Young becomes hot topic in office while Sang Su calls her making the wrong choice for solving the issue. Su Young gets offended saying that she never had any choice in the first place. In the meeting, Yuk praises Sang Su and taunts Su Young. Su Young passes by the meeting room when everyone was discussing about her. She gets disheartened when Sang Su comments that she made a choice to make her job difficult.

Su young later meets her mother and they both discuss about their father. She blames him for Su Yeok’s death as she found his cell phone at a place where she spotted her father with another woman. She believed that he met with accident witnessing the same and blamed him for his death. Su Young’s mother calls him a good person and he’s not at fault. Su Young gets angry hearing it. Her mother asks her to stop hating on her father and Su Young leaves upset. On her way, Su Young recalls her cold treatment towards Sang Su and regrets for her actions. Jong Hyun creates after she gets down from bus and they both run together in rain. She recalls all the times he helped and cared for her. He proposes to e her boyfriend and Su Young accepts it. He gets extremely happy. Next day, Audit team visits office and enquires Bae Eon Jong and Ma Du Sik in private. After some time Yuk angrily marched towards Su Young but Sang Su comes in the middle protecting her.