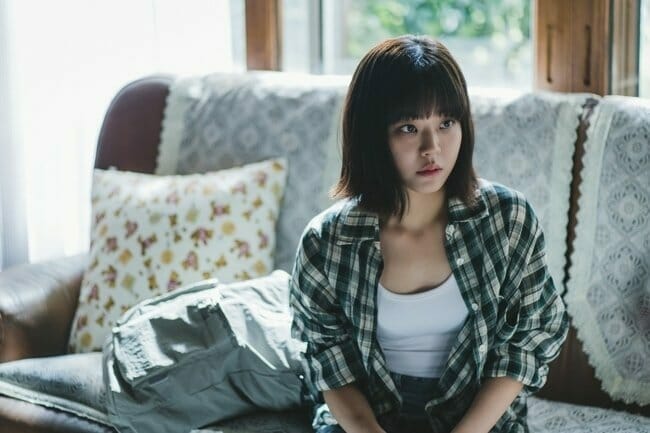 The episode starts with Hye Joo getting shocked when Soo Bin says that she’s pregnant with Ji Hoon’s child. On the other hand, Jung Do’s political career is at stake upon knowing about his son involved in drugs practice. His opponent mocks hm for being incapable to even silence the rumor. The opposition party demands for him to step down from his position. Jung do attends all the events tirelessly in order to silence the spreading rumor while his PR team pities for his condition. His popularity keeps going down in social media. Hye Joo welcomes Soo Bin in and asks for her text messages with her son to prove that she was dating him. She says that she lost her phone and shows her pregnancy test results as proof. She even says about Ji Hoon saying that Hye Joo has no parents. She says she’s also similar to her as she separated from her parents after their divorce and has no where to go. She asks what did she plan to do with the baby for which she replies that she doesn’t know. She asks for them to show a way. Her sister comes there and get shocked seeing her.

Jung Do got drunk as he worked hard to retrieve his name in politics. He got to know from investigator that there are no traces of drugs in autopsy but the drug catching team found his son’s burner phone involved in the racket. He also adds that there are CCTV proofs of Ji Hoon visiting the rest room near Han river where there is a possibility for drug exchange. Jung Do gets tired. Yeo Jin asks for proofs that she stayed with Ji Hoon as he was out only for fifteen days after his release. Soo Bin is confident that it’s his child. He comes back home drunk with Won Jae. Hye Joo enters the car and narrates the situation to him. Jung do asks why did she let her home as she could bring further trouble. Hye Joo says that she sees herself in her as even she had no where to go when she first came to Seoul carrying Yoon Seo. She says she couldn’t get rid of her just like that as the only difference is she had him to support her but Soo Bin has no one. Jung Do comes in and rashly questions Soo Bin for proof that it’s Ji Hoon’s child. Soo Bin asks them to get it aborted if they want but also threatens to expose them dumping her to media. Yoon Seo who just entered badmouths Soo Bin and blames her for making Ji Hoon take drugs.

Soo Bin ahs no idea about it while Yoon Seo hurls numerous accusations on her. Hye Joo and Jung Do tried stopping them but in vain. Yoon Seo says that it’s true that she wanted her brother to die seeing him troubling her father so much by landing himself in trouble. However she adds that she couldn’t get to accept that he’s gone for real. Finally Hye Joo settles them and send Yoon Seo to her room. Won Jae agrees to find her a way but also warns her to not mess with Jung Do’s political influence. Hye Joo shows Ji Hoon’s room to Soo Bin asking her to rest. Soo Bin actually have a phone in her bag and she lied about missing her phone. Won Jae is smoking and Yeo Jin joins him. She asks how would the mess will end up for which he replies that as of now everything depends on Soo Bin’s decision as if she wishes to keep the child then there are chances for them to use it in general election to get votes. He leaves asking Yeo Ji to not smoke anymore. Hye Joo comes to upset Jung Do who asks her to get Soo bin tested for drugs. Hye Joo trusts her but Jung Do doesn’t given the fact that she’s his son’s friend and could have been involved in same practices. Everyone spends sleepless night and Jung Do leaves early morning. He’s still troubled by reporters who question him about his son’s drug case and him misusing his power to elevate the search for his daughter’s missing case. Jung do refuses to answer it when Hye Joo pops in and takes the blame for forcing him to use special powers. Jung do controls her and sends her back in and leaves to his place.

The oil lady sees it on interview and feels bad for Jung Do and Hye Joo wo showed concern to her without having any relationship with her. She passes by the media person who reports against Jung Do and Hye Joo along with her grand daughter’s suicide. She lashes out at her inhuman act and says that they were the only two people who visited her grand daughter’s funeral when she had no one to mourn with. The reporter asks if it is to cover the controversy but she says that it’s even before his son’s death. The news goes viral as the emotions of people towards Nam changes gradually. Hye Joo vents out her frustration keeping herself busy with house hold chores. Jung Do gives an interview apologizing for his son’s drug case and also for misusing his power. He calls out the prosecution for minimal punishment for digital sex offenders and promises to severe the punishment. He says that he wishes that no more people experience what he and the old lady had been through. The old lady sees him nd thanks him whole heartedly. He comes home and they both recall visiting the old lady and different times for just empathizing her. He feels guilty about it but Hye Joo supports him believing his kind nature. Police comes to arrest the medical student who threatened the old lady’s grand daughter but the boy commits suicide jumping off the building blaming Jung Do for his suicide.