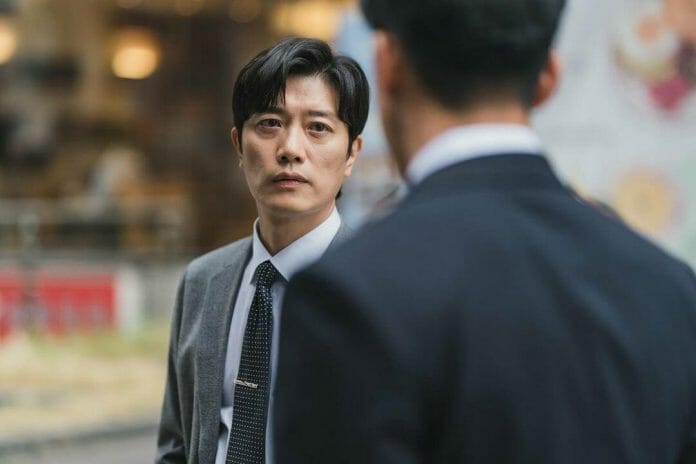 The episode starts with Hye Joo getting shocked seeing Seung Hee at her door who calls her murderer. Seung Hee wants to settle scores with her but Soo Bin pops up whom Hye Joo introduces her as someone she knows. Seung Hee pretends to be an old friend of Hye Joo and leaves taking her number to catch up later. Hye Joo suffers panic attack and cancels her plan to visit Ji Hoon with Soo Bin. Choi Ki Young also backs off from giving any statement to Nam but Nam tries to warm up with him saying that his wide shares the same native as him. Nam gets to know that the medical student’s mother consumed pills and is admitted. His guilt deepens while Woo Jae again asks him to visit the mother given hos elections around the corner. He recalls apologizing I front of whole nation for his son’s act and was in a similar situation as the mother.

Ki Young recalls Seung Hee saying that she ran away from the place after graduation. Seung Hee looks at Hye Joo’s social media pictures and fumes that she lives a happy life. Hye Joo is sitting scared in her room when Seung Hee sends her the news of the medical student’s death nd calls her husband also a murderer like her. She sends her the place and time of their meeting and wants her to come to Yongsan. Seung Hee comes back home whose mother is not pleased that she left out leaving her to be alone. She emotionally blackmails her to go with her to buy a land. Seung Hee gets even more furious to meet Hye Joo.

Assemblyman Nam is having a meeting with his people who look upon him for his good deeds and want him to be elected again in the upcoming elections. Seung Hee waits for Ki Young and is scared that he would have left the house. Ki Young calls her for a dinner but she says that she already has plan. Soo Bin comes down to find food already on table. Yeo Jin says that Hye Joo didn’t have her food as she is not well. Soo Bin offers to take porridge to her room. She finds the room empty a nd is about to leave when Hye Joo’s phone rings, she is about to pick it when Hye Jo barges in a nd snatches the phone from her. She warns her to stay away from her things and not touch it without her permission. Soo Bin leaves apologizing. Nam calls Hye Joo who lies that she’s fine. Nam ignores Woo Jae’s warning and visits the medical student mother removing his badge. His father hits him blaming him for his son’s murder and asks why he’s here. He says that he’s not there as assemblyman but as a father who lost his son. The father is till not convinced when the hospital staffs comes to control him.

Soo Bin hears Hye Joo’s soft words towards Yoon Seo who’s concerned about her health. She gets angry a nd misses her lip balm. She herself goes to the studio to find it only to find the sesame oil given by the old lady. She noticed Yongsan on it and recalls finding a ticket from Yongsan when Seung Hee visited too. Both Nam couple and Choi couple spend a sleepless night. Next day Nam finds Hye Joo pale and asks about it but she lies that she’s fine. He takes his leave and Hye Joo comes to Soo Bin’s room. She finds the oil a nd Soo Bin says how she got it from her studio when she went to search her lip balm. She again scolds her for touching her things without her permission when Soo Bin asks what should she do now. Hye Joo is in her studio when she recalls herself covered in blood in front of police station seeing red ink. Soo Bin gives the oil to Yeo Jin upon Hye Joo’s saying.

Soo Bin finds a kid not paying for her snack and says about it. She just then notices the poster stating free food for kids, teenagers and pregnant women. Nam greets Yoon Seo’s classmates and they were all impressed with his simplicity and attitude. Yoon Seo feels proud. Yeo Jin invites Soo Bin to have food and she serves her. Yeo Jin says to her employee about how she met with Nam’s mother who fed the homeless her and also many others by providing them with food. She speaks high of her and calls Nam a resemblance of her. Soo Bin laughs at her words but hides it from Yeo Jin. Yeo Jin still notices it. Nam is discussing about his bills that were not passed in the assembly. They discuss about how the sexual offender case gets brushed under the rug with the suicide. They say that only a very heinous sexual assault case can again bring the lime light. Soo Bin tries to pay for her dumplings when Yeo Jin shows her that it’s free for pregnant women too.

Yeo Jin calls Hye Joo and she says to her about an assemblyman from Nam’s party got into a scandala s his wife committed a hit and run case. It creates quite a bad image for the party. Nam also sees the news and Hye Joo also checks it in internet. Nam’s assistants discuss about how a wife’s action can cost his career for an assemblyman. They are glad that Hye Joo doesn’t create any mess and is silent which is much better. Seung Hee again calls Hye Joo who confirms that she will be visiting Yongsan. Nam finds the old lady whose grand daughter is the victim by medical student cleans his office as a payback for his help a nd Nam sends her home with respect. It’s revealed that the medical student before dying, already uploaded the private videos on internet which is not aware to the old lady. Nam tries his best to get it all down from internet. Hye Joo is on her way to Yongsan when she recalls what actually happened. Seung Ho tried to misbehave with her but she managed to escape with minimal injuries. She was about to report to Police but instead backs off and informs his mother. His mother tries covering up her son’s mistake with money and scholarship which Hye Joo agreed to accept given her condition. However Seung Ho mocks her for being a money leech and she reports him to Police in anger. He commits suicide and she ran away from Yongsan right after that. She finally comes to the place Seung Hee mentioned only to find Nam there with them.