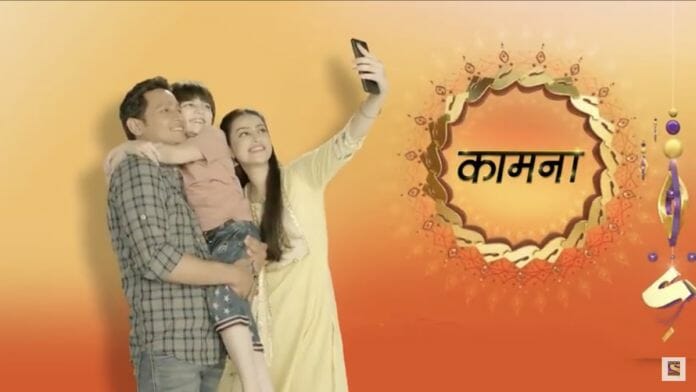 Sony TV’s popular show Kaamna currently focuses on Manav finding Niharika is alive while Vaibhav planning to escape from getting married to Akanksha.

In the previous week we have witnessed, Anurag hit Yadhu but Sakshi saved him on time. However he got hurt a little. Sakshi took Yadhu to hospital and kept calling Manav but he couldn’t hear it as it was silent. Vaibhav came to meet Manav and proposed a deal to him to merge Kapoor and Holkar but Manav turned it down. He got to know that driver didn’t pick Yadhu and Yadhu was not home yet. Yashoda gave him his mobile back removing silent mode and Manav got shocked seeing the missed calls from Sakshi. Ayesha informed Manav about Yadhu’s accident and Manav immediately called Sakshi.

Everyone got relieved when Doctor told that Yadhu had only minor injury and fainted due to shock. Manav and Akanksha met him in ward and Akanksha blamed Manav’s carelessness for Yadhu’s condition. She asked him to understand that he can’t take care of Yadhu like her and asked him to send Yadhu to her. Meera suspected Yadhu’s accident to be a planned one and wanted to lodge a complaint. Sakshi also agreed with her while Manav too suspected Vaibhav. Vaibhav pretended innocent.

Later, Akanksha confronted Vaibhav but he still pretended innocent. Vaibhav called Yashoda and asked her to burn down Manav’s office as her final work and she agreed. Manav met with Yadhu and apologized him. Yadhu credited Sakshi for saving his life. Akanksha wanted to meet Yadhu but Yadhu paid no heed to her. He threw her out. Manav called security as he couldn’t reach Yashoda and driver.

Security informed about both leaving with their things and also told him about the fire. Manav, Meera and Holkar understood that it was a planned accident by Vaibhav. They both rushed to the office to find it completely burnt down and Manav cried as all his hard work went in vain. Vaibhav called me Manav and mocked him while Holkar fainted.

Akanksha angrily confronted Vaibhav for making Yadhu’s accident but Vaibhav told her about the pros of his work. Akanksha got happy as she would get money as well as Yadhu’s custody. Manav shared with Sakshi about the fire by Vaibhav and it burning down all the important documents and files. Sakshi asked him not to lose hope as evil never won over goodness. Manav scared about how to raise Yadhu and felt guilty for letting down Holkar and Ayesha’s trust.

Sakshi encouraged him to win the fight for Yadhu, Holkar and Ayesha and gave courage to him. They Broughton Yadhu home and Manav left to check on Holkar. Yadhu blamed himself for all the mishap but Sakshi asked him not to do so. Yadhu asked her to stay there as Manav’s strength. Vaibhav was blackmailed by some Dr. Khale and Babli video recorded it without his notice.

Yadhu got Sakshi’s voice mess which stated that she can’t stay with him but promised to visit regularly. Manav and Holkar got notice from Vaibhav to vacate the house and office even before due and Manav scared of going on street with Yadhu, Holkar and Ayesha.

Yadhu stepped in front of Manav and challenged Akanksha that Manav would defeat her and Vaibhav like he did many times and her dream would never come true. Akanksha leaves challenging back. Manav was glad that he had Yadhu and Sakshi by his side for his courage but Yadhu told about Sakshi’s voice message. Manav called Sakshi and confronted her for leaving him in the most needed time being his friend but Sakshi encouraged him and cheered for him from far. Manav got convinced.

Akanksha asked Vaibhav to sign the prenuptial agreement but Vaibhav postponed it saying that he need to consult with his lawyer before that. Akanksha agreed. A pooja was kept at Manav’s home and Sakshi was present there too. Holkar and Ayesha attended the pooja where Guruji told them to come with his daughter. Holkar told that she was not alive but Guruji told that she’s alive shocking everyone.

Guruji checked Niharika’s horoscope and revealed that she was alive and asked them to find where she is. Manav doesn’t want to give false hope to Holkar and Ayesha and discussed with Sakshi. Sakshi told that if Niharika’ was alive and still didn’t return then there would be only one person who got benefitted due to it and it was Vaibhav.

Manav recalled seeing Vaibhav making large transactions from the time Niharika disappeared and wondered whether Vaibhav kept Niharika hidden. They got Babli’s message and Manav’s suspicion deepened. He asked about Dr. Khale to Holkar but he has no clue about him. Manav suspected that Vaibhav would have kept Niharika alive just in case he may need her anytime and he would not continue doing so if the properties got transfered to his name.

Manav asked Holkar to get some papers ready which could hinder Vaibhav from getting holding of the properties and Holkar left to find it. Akanksha got spooked at night and was really scared. She couldn’t get in touch with Vaibhav or Babli too fir help. Manav assured Ayesha to bring her mother back to her if she was really alive. Akanksha got scared a lot and called Babli for help but Babli ran away sensing ghost presence. It was all Vaibhav’s plan to make Akanksha back away from the wedding.

Akanksha called Vaibhav and informed about the spooky experience but he cut the call saying it’s all her hallucination. He continued scaring her and Akanksha fainted. Rane checked her and informed Vaibhav that she was alive. Vaibhav asked his men to continue scaring her the next two days till she backs away from the wedding. Manav and Holkar found Niharika’s insurance policy without a nominee name and made a plan.

They sent the notice to Vaibhav using Insurance office to get the nominee name mentioned. Vaibhav left somewhere and Manav missed to follow him. Ayesha prayed for her mother’s return. Holkar watched over Vaibhav while submitting the form. He found him submitting with Niharika’s fingerprint and found it matched with old records.

He got emotional and informed it to Manav. Manav happily informed Ayesha that her mother was alive and she broke down emotional. Manav promised Holkar and Ayesha to bring back Niharika no matter what.

In the future episodes we will witness, Manav will enquire about Niharika’s accident and will decode that Vaibhav made a deal with Dr. Khale on the day of accident and made Niharika disappear.

Will Akanksha and Vaibhav succeed in their plan ? Will Sakshi and Manav get married? Will Niharika comes back ?