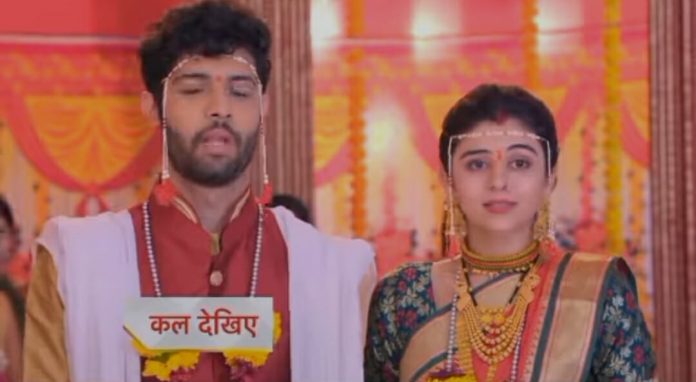 Star Plus’ popular show Kabhi Kabhi ittefaq Sey is all set for a new twist with Gungun exposes Akriti’s conspiracy against Kulshreshths.

In the current story it’s seen that Akriti comes to stop Gungun and Anubhav’s wedding stating that Anubhav is already married to her. She tries to take advantage of Anubhav’s memory loss and tries to manipulate him against his family and Gungun.

She accuses Gungun of trying to kill him. She claims of saving him with her prayers. She tells that Gungun humiliated his family in the pre wedding party. Gungun reveals that it was a conspiracy of Akriti and her mom.

She reads her mom’s chat in which she asks Gungun to be careful with Akriti and mentions about Akriti’s plotting to insult Kulshreshths at the pre wedding party. Anubhav gets furious learning the truth and lashes out at Akriti.

He tells how he had to marry Gungun to save her from Ranvijay and how Akriti’s cheap behavior brought them closer. He says that Akriti’s love is selfish so that she humiliated his family and forced him to stay in the marriage where there’s no love whereas Gungun’s love is selfless.

Akriti threatens to claim a share in the Kulshreshths’ house if Anubhav marries Gungun. Armaan clarifies that Akriti can’t share in the property as only Court can decide it. He threatens to expose Akriti’s truth on the media.

Akriti starts her drama and acts of regretting her act. She apologizes to Anubhav and seeks for a second chance. She tried to attack Gungun when Anubhav and Kulshreshths don’t budge.

Bina and Prakash threaten Akriti to get arrested if she harms Gungun. Akriti vows to take revenge on Gungun and Kulshreshths and walks away.

In the upcoming episode it will be seen that Anubhav and Gungun will get married. They will take Charudatt’s blessings.

Anubhav will apologize to Charudatt for hurting him. Charudatt will say that it’s not time for apologize, but for hugs.

What will happened next? What will be Akriti’s revenge plan?