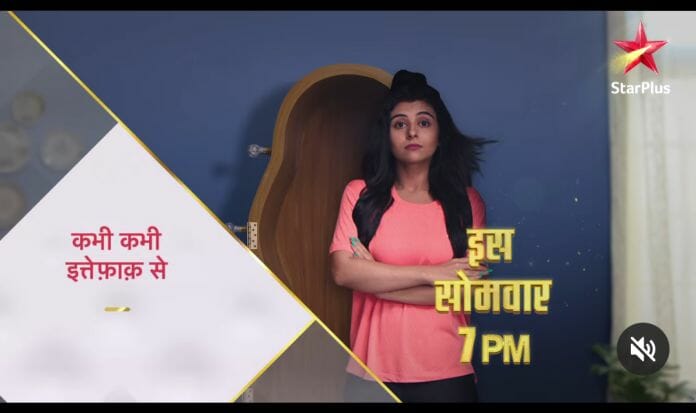 The episode starts with Gungun is on her way to meet Anubhav. Sargam compares Akriti with Gungun. Sunanda agrees with Sargam. Akriti comes there with others. Goli comes from school and asks where they all are going. Akriti tells Goli that she is giving her and Anubhav’s wedding party treat. Goli refuses saying that she is tired but the Kulshreshth’s women persuades her. Akriti says that she already booked an appointment for massage after dinner.

Goli refuses again so Sargam Sunanda threatens her to cancel their plan. Other’s also agrees with her. Akriti says that she will cancel the booking but she has to pay. Charu hears it so he comes there and starts scolding Goli for trying to waste the money of Akriti. Goli agrees to go with them making everyone happy. She goes to get ready. Chavi asks how they are going to go to the restaurant. Akriti decides to book a vehicle for them to reach the restaurant. Anubhav comes to the restaurant and the receptionist takes him to his place.

Anubhav takes his seat and asks the waiter to bring all the food that is best in the restaurant as he doesn’t know what his company likes. The waiter agrees. Gungun comes there. Anubhav sees so calls her out from his place. He then feels embarrassed after seeing everyone is looking at him. Gungun takes a seat opposite to him. She asks the reason behind him calling her.

Anubhav says that they can have dinner first then talk about it. Gungun says she isn’t hungry. She then sees the waiter is bringing so much food to their table so questions Anubhav why he ordered this much food because they are the only two people here. Anubhav recalls the time Gungun brought all flavor of icecream for him and smiles. He then tries to feed Gungun but the latter says that she is not ill but Anubhav makes her eat by his hand.

Anubhav asks Gungun is this necessary for her to go to USA because she wont be happy there. Gungun says even she is not happy here. Anubhav says that she and Maya don’t get along also she will feel alone and there will be no one by her side to comfort her. Gungun tells even if she stays here there will be no one to comfort her. Anubhav says that he is here for her only then why she is talking like this.

. Gungun gets angry and asks Anubhav why he is talking to her like this. She already warned him to not to to talk like her this way. She also tells that he has his wife and whatever he is saying now he wont talk like this infront of his family members or tell the truth to them about what happened between them so instead of ruining his marriage life by running behind her he has to focus his marriage life with Akriti.

Kulshreshth’s women are on their way to the restaurant in a small bus. They all sings a song together and enjoys. Sargam praises Sunanda’s singing. Kushi says that she is hungry. Chavi suggests that they can plan here itself what to have so that the time will not get waste. Everyone agrees and says what they want to have as their dinner. Anubhav pays the bill then asks Gungun about her flight timing so that he can plan his day according to it.

Gungun tells Anubhav that she already told him not to get involved with her then leaves the place angrily. Anubhav follows her forgetting his phone. Gungun is in her car ready to leave but Anubhav stops her and asks her why she is leaving all of sudden. Gungun cries and says that she don’t like the way he talks to her also the fake concern he is showing on her. She also tells how many times she has to tell him to focus on Akriti Akriti because she is his wife and his responsibility. Anubhav tells Gungun that she knows already he considers her only as his wife.

Kulshreshth’s women reaches the restaurant. They all goes inside. Akriti feels weird so she looks at the place where Anubhav and Gungun is but fails to notice them so she goes inside.

Gungun cries and says to Anubhav that she dont want to stay back in India. Anubhav angrily asks her to go to USA and find a guy then get married to him. Gungun gets furious and tells Anubhav why they all are worried about her marriage life she already told that she dont want to marry anyone. She also says all she want is go to her dad. Anubhav takes Gungun’s hand and warns her not to say such things because if she tries to harm herself then he will also do the same to him which shocks Gungun. He tells her that she already wipe off the vermilion from her forehead so she knows the meaning behind it and he wont hesitate to harm himself. Gungun cries.

Kulshreshth’s women praises the hotel. They all hears a phone is ringing. Akriti says its similar to Anubhav’s ringing tone so she and Kushi goes there and finds his phone. Gungun leaves the place. Anubhav realises that he left his phone inside so goes to take it but sees Akriti have it and gets shocked. He also sees the Kulshreshth’s women there. They all asks him to join them but he refuses and lies to them that his client is waiting for him and leaves the place taking his phone. Akriti gets upset and refuses to eat and when the Kulshreshth’s women persuades her she shouts at them shocking everyone.

The next day Kulshreshth’s comes there to attend Ridesh’s funeral. Anubhav and Gungun looks at each other. Akriti notices it so she taunts Gungun. Gungun mocks at her. Charu gives the offering they brought for Ridesh’s funeral and says to Gungun that they thought to bring as she is not aware of any of this. Gungun says that all the things are already here. Maya accuses Charu for mocking Gungun and says that her mother is with her. Charu gets shocked and looks at Gungun.

Precap: Gungun enters the Kulshreshth’s house with her belongings. She goes to Anubhav and says that she knows he loves her so much so she decides to stay with him in the house as his wife shocking everyone. Akriti gets furious and tells Gungun she dont have place I’m Anubhav’s heart also in Kulshreshth’s house and tries to slap but Gungun holds her hand and says when the first wife is talking the second wife should remain silent shocking everyone. Golu smirks.