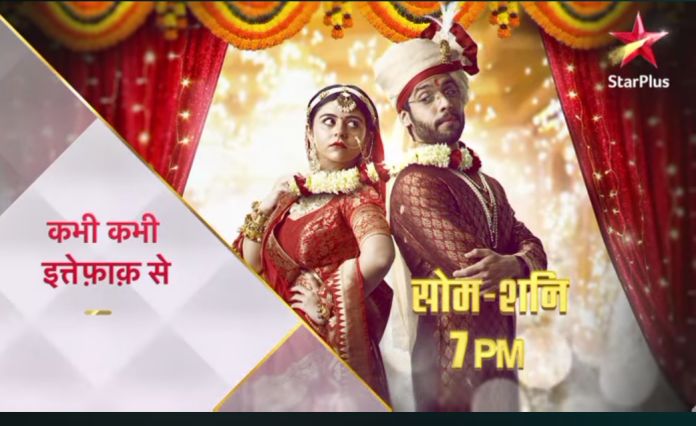 The episode starts with Akriti saying that Anubhav and Gungun’s marriage can’t happen since he is already married to her. Golu wonders how Akriti reached here. Akriti tries to manipulate Anubhav against Gungun and his family unaware of Anubhav getting back his memory. She says that they all are fooling him. She blames Gungun for trying to kill Anubhav.

She says that Gungun manipulated his whole family and got them on her side. She tells that Gungun and her mother insulted Anubhav and his family in the pre wedding party. Gungun shouts shut up. She says that Akriti teamed with her mother to marry Anubhav. She further says that she has proof for that. She has the chats of her mother’s. She reads those chats. In the chat Maya says to not trust Akriti and mentions about their plotting to break Anubhav and Gungun’s marriage.

Akriti says that Gungun is lying and rebukes her. Anubhav shuts Akriti’s mouth and warns to not utter a word against Gungun. Anubhav says that he doesn’t remember everything, but he remembers Akriti’s misbehavior with Gungun. He says that Akriti is jealous so, she joined hands with Maya and insulted them in the party to make Gungun villain in front of his family.

She did drama of being a perfect daughter-in-law in front of his family and got married to him. After their marriage she separated even Garima from Gungun and made her alone. He says that he had fill Gungun’s hairline on the day of their wedding to save her from Ranvijay. Gungun accepted that marriage as her truth. He slowly understood that marrying Akriti is a mistake and he married her for family’s sake.

He says that there’s no love in their marriage and he lost his respect for her with her behavior and brought him close to Gungun. He says that they both tried hard to stay away from each other, but her behavior brought them together. Gungun even tried to marry Ranvijay to go away from him, but Akriti keeps poisoning his family’s mind against Gungun. Akriti says that he was keep cheating her with Gungun so it’s not wrong to raise voice against it.

He says that Gungun didn’t try to remove Akriti from his life as she is selfless and thought about him and their family. He says that this is called loved. Akriti says that she also loves him. Anubhav asks where she was when he got kidnapped. He says that she was provoking his family against Gungun while Gungun was trying to save him from the terrorists. He asks all the people present there who loves him truly and whom he should marry. All says Gungun’s name.

Akriti warns Anubhav about the consequences of marrying Gungun. Anubhav asks what she will do. Charudatt tells that Akriti demanded share in the property. She wanted his price money and threatened to register police case Sargam for domestic violence. Anubhav says that Akriti can’t do like this.

Akriti demands her share in Kulshreshths’ house if he marries Gungun. She asks Anubhav to choose between his house and Gungun. Armaan intervenes and says that after divorce the court has the power to decide whether Akriti will get a share or not and not Akriti.

He says that Akriti can’t get a share from their house. He threatens to expose Akriti’s misdeeds in the media and ruin her career. Akriti starts doing her drama. She says to Anubhav that she did everything for Anubhav. She apologizes to Anubhav and Kulshreshths and asks for a second chance. Charudatt asks Akriti to go to the court, she will get money she wanted while Gungun will get Anubhav and his love.

Anubhav says that he will send her divorce papers. Akriti blames Gungun for everything and regrets of not listening to Ranvijay and kill her. Bina and Prakash threatens Akriti to get arrested her if she harms Gungun. Akriti vows to take revenge on them and leaves. Prakash says to Gungun that he got to know about Anubhav being alive through the taxi driver who picks Akriti up in the airport.

Charudatt decides that his half family will be on Gungun’s side as she doesn’t have family. Radha says that this locality people is with Gungun. Chandru asks to play music.

The episode starts with Anubhav saying to Gungun that he doesn’t want to return to his family. He is dead for them, so he wants to have a new start with Gungun in Mumbai. Gungun refuses to separate Anubhav from his family. She says that she saw them mourning for his death and she can’t let them be in the pain which doesn’t exist. Anubhav says that they try to separate them again. Gungun saus that she can’t separate him from his family for her happiness. She says that they’re going to get married and it’s enough for her.

Radha takes Anubhav to the temple. Bina friend gives Armaan Anubhav’s safa and asks to give him when he will return from the temple. Armaan nods ok and puts it around his neck. Kulshreshths arrive there. They misunderstand that Armaan and Gungun are getting married. Golu says that he called them by lying. They lash out at Gungun for getting remarried easily forgetting Anubhav.

Armaan stops them. He says that he called them here so, asks them to talk to him. He says that Gungun never forgot Anubhav, no one could love Anubhav more than Gungun. Charudatt blames Gungun for Anubhav’s death. Armaan asks for proof. He says that he is a reporter and he can differentiate between truth and lie. He says that he got to know that Gungun isn’t a murderer when she told him the full story. He tells them what all had happened.