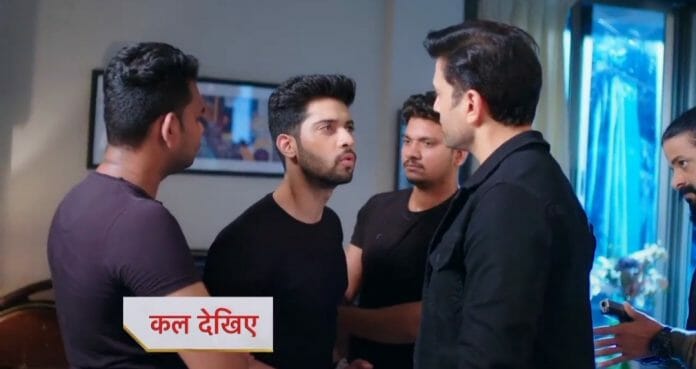 Star plus popular show Kabhi Kabhie Ittefaq Sey is gearing up for more drama with Akriti revealing about Gungun and Anubhav’s relationship truth to the Kulshreshths.

In the current story it’s seen that Ranvijay kidnaps Anubhav and hands him to the terrorists in exchange of money. The terrorists demand Anubhav to help them to make weapons for themselves. Anubhav refuses to help them. They threaten him with gun. However Anubhav declares that he is ready to die, but refuse to betray his country at any cost. The terrorist decide to keep him starving for two days to break his willpower. Meanwhile Gungun senses that Anubhav is in some trouble when her vermillion shatters. She feels guilty of saying hurtful words to Anubhav. She tries to contact him, but in vain. Akriti argues with Gungun asking about Anubhav’s whereabouts. Gungun says that she doesn’t know. Kulshreshths reach home thinking that Anubhav left for Lucknow before them. They get worried knowing Anubhav hasn’t reached home yet. Akriti reveals to the family abou what happened in Mumbai. Bade pap gets furious and wants to punish Anubhav. Golu request him to give Anubhav a chance to explain and blames Akriti for Anubhav’s disappearance. But Akriti accuses Gungun of hiding Anubhav somewhere in Mumbai.

In the upcoming episode it will be shown that Bade papa will call Gungun and will ask Anubhav’s whereabouts. Gungun will say that she’s scared that Anubhav might have taken any wrong decision because of what Akriti did last night. She will say that she doesn’t know where Anubhav is, but Akriti is responsible for his disappearance. Bade papa will warn Gungun for accusing his daughter in law. Gungun will ask if he understand now how it would feel to get accused. Akriti will say to not believe Gungun, she is sure that Anubhav is with Gungun

Will Gungun and Kulshreshths find out about Anubhav’s kidnapping? Can Anubhav escape from the terrorists?