Today’s episode starts with  the leap of 4 months. RJ announces that KPK topped the TRP chart again. Netra gives the interview and introduces some other actors as Parvati and Kunal intead of Sumit and Sonakshi. She says Sumit and Sonakshi got engaged with their personal stuffs thus they launched new faces and now they are still breaking the TRP chart. Reporter asks Netra about Sonakshi.

Sonakshi is seen at the police station. She meets Suman where Suman reveals she got trapped after investing Sonakshi’s hard earned money to the builder. Sonakshi assures Suman that she will take her out from the jail. Suman asks Sonakshi how she will do that as her career is finished. Sonakshi says she has given auditions.

There, Sonakshi meets lawyer and lawyer refuses to go for the hearing and demands for the money. Sonakshi assures him that she will arrange the money by tomorrow. Other side, Nishi refuses to help poor people for the operation of their son. Rohit over hears her talk and orders Ravi to help them. Nishi pretends to be good in front of Veena and Naren. Tanya and Rohan get happy feeling baby’s kick. Here, Pari sees her tummy and worries. Sonakshi struggles to arrange the money. Meanwhile, she gets an offer to play sister-in law in a show. Sonakshi accepts the offer.

Later, Rohit operates that same old people in his small hospital. Tulsi helps Rohit and Rohit thanks her for fetching time from Sippy mansion and helping him. Further, he spots Pari at his hospital and thinks what she is doing here. Before he could reach her, he gets a call from his friend and his friend asks him to come for the party.

Other side, Sonakshi reads the role and agrees to play. She demands for 4 Lakh rupees but producer refuses to give to her. His assistant tells to Sonakshi that she can get instant money by dancing at his brother party. Episode Ends with Sonakshi accepting the offer.

Precap: Sonakshi dances at the party and gets shocked seeing Rohit at the same party. 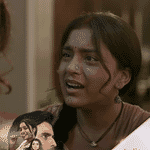