Todays’ episode starts with Rohit reaching Pune. He sees the telecom company closed and call to someone. He asks the person that he got the number from Suraj Singh. The person from the otherside asks him to wait for 45min. Rohit ask him to come soon.

Sonakshi reaches the venue. Matre welcomes Sonakshi and ask his men to take Sonakshi to the room. Matre tells to his brother that on his bachelor party Sonakshi will be the show stopper. Nikhil gets happy and excited.

Suraj’s friend comes and gives the Rohit Raima’s address. Rohit thanks to the person and says he has done a big favor on him. Suraj’s friend says to Rohit that he hope he find what he is looking for. Rohit goes away.

Sonakshi gets ready for the party and recalls Rohit’s word. She talks with the audiences about Rohit. Matre’s waitresses come inside and give Sonakshi short dress. They ask to her to get ready, as there is her performance. Sonakshi says but she is here only for the appearance. Girl says to her that she has to perform too.

Rohit rushes to Raima’s house. Sonakshi ask to Matre what he is upto. Matre tells Sona that it’s bachelor party of his brother so she has to wear the dress and have to dance. Sona yells at Matre and says he has asked her for the performance.

Matre threatens Sonakshi and gives her 10 minutes. He asks her to get ready and come fast. Sonakshi stands shocked.

Rohit reaches to Raima’s house and knocks. Sonakshi gets angry on Matre.

Sana opens the door and recognizes Rohit. Hitesh ask who is there. He sees Rohit, gets angry on him, and asks him to leave. Rohit ask them to let him meet Raima once. He pleads them to let him talk with her once. Hitesh throws Rohit out and ask him to leave. Sana says to Rohit that they will never tell him how Raima is and where she is. Rohit gets hurt and struggles to meet Raima. Hitesh closes the door.

Hitesh and Sana goes inside the room and informs to Raima’s mother about Rohit. They say to her that they need to shift Raima from there. Raima’s mother worries for Raima.

Matre comes and ask Sonakshi why she is not ready. Sonakshi opens the door and Matre’s stands shocked seeing his family. His daughter hugs him and thanks him for giving her such a big surprise. Matre stands numb. Sonakshi ask them to click pictures. Matre excuses himself and goes away.

Rohit gets drunk and recalls his past. He gets emotional. Matre ask Sonakshi not to act smart else she will regret it later. Sonakshi says to Matre that she is not like Parvati who cries in the show. She says to him that she don’t fear him and ask Matre to wrap up the work soon, as she has to go back for the shooting.

Rohit sits in the rain and drinks. He thinks of his moments with Raima and cries.

Precap: Venna worries for Rohit. Rohit about to get hit by Sonakshi’s car. Sonakshi ask Shankar to drive carefully. 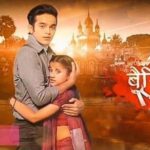