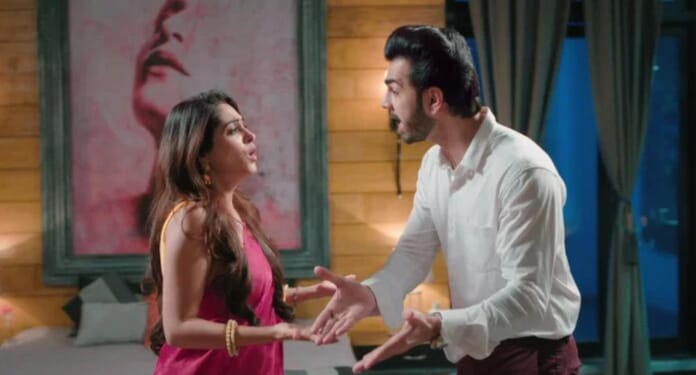 Today’s episode starts with Sumit telling to Suman that whatever good happened with them was done by Rohit and he was just the medium between him and Sonakshi. Suman stands blank.

Here, Tanya dreams Pari suffocating her to die. She screams and Rohan tries to calm her down. Tanya loses her cool and Rohan says neither her Pari is here nor her baby. Veena scolds Rohan and says to Tanya that Rohan is lying and asks Rohan to leave the room.

Other side, Suman apologizes to Rohit after learning how to protect her from his family he acted rudely with Sonakshi. Rohit promises Suman and says he will bring her back. Meanwhile, Ajit calls Rohit and asks him about Sonakshi. He says Naren wants to meet her. Rohit asks Ajit to keep an eye on Nishi as he doubts behind Sonakshi’s kidnapping she is there. Later, Rohit recalls his moments with Sonakshi.

Further, Venna slaps Rohan for taking rudely with Tanya. She asks about Rohit. Ajit interrupts and asks her why she hates Sonakshi in spite Sonakshi never did anything wrong with her or with the family. He counts his good deeds and Veena slaps Ajit too and asks him not to take the name of Sonakshi again in the house. Nishi gets happy hearing Veena hates Sonakshi. She wonders where Sonakshi escaped.

Here, Suman tells to Pari that only one person can save Sonakshi. Other side, worried Rohit enters the special mask without mask and Tulsi asks him why he entered the room without mask.

Ahead, Tantrik tells to Suman that someone close to Sonakshi is giving pain to her. Venna unmasks herself as the kidnapper and Sonakshi gets shocked. She asks Sonakshi why she kidnapped her. She further asks Veena to leave as she is affected with Super virus.

Venna reveals to Sonakshi that she is not affected with super virus and tells her that someone wanted to change her report. Sonakshi asks Venna why she is harming her. Veena says for Rohit’s sake. (Episode Ends)

Precap: Rohit tells to Sumit that he might be infected with Super virus.