In the last episode, Rony tried reconciling with Rupa, but the latter gave him a stern reply and left. Gunjan and Saroj got badly taunted by Daadi. Kahani spoke up in Saroj’s support.

Kahani asked Yug to kill her and finish everything, but Yug failed to hurt her. Saroj announced that Kahani will not be provided food from now on. Gunjan called Lawyer and made Yug sing the divorce papers but Kahani burned them and saved her marriage smartly.

In the upcoming episode, Kahani will be seen asking money from Yug for Lucky and Rani’s food but Yug will insult her and give money to Gunjan referring her as his wife.

Gunjan will smirk and ask Kahani what will she do now, Kahani will ask Gunjan to think about herself, she knows how to handle herself as she is an orphan since she was four years old.

Rony will harass Rupa in Kitchen and Saroj will catch him. She will slap and threaten to break his other leg too. Kahani will search for money and tie cloths on Lucky and Rani’s stomach.

While Rani and Lucky will be seen trouble because of hunger. Seeing kids hungry, Yug will offer money to Kahani. Both will have Nok-jhok and Kahani will refuse his money. She will leave to earn money from Hard-Work.

Kahani will find a way and dance in front of shop to earn money. She will promise shopkeeper some profit share from her earning. People will enjoy her dance and throw money at her. On the other side Yug will be seen feeling Guilty and worried for Lucky and Rani. He will on be able to eat food. Saroj will try to make him eat and explain dancer women’s tricks to trap men.

Some goons will too see Kahani dancing on street/road and try to harass her. She will push them and run away. They will follow her and she will run into Yug’s arms.

Here is the new montage of Namak Issk Ka, See video in the link below:

Will Yug get successful in sending Kahani away? Will Kahani get to know about her and Ravikant’s relation before it gets too late? Why Patanga helped Kahani? Will Kahani be able to expose Iravati? What will be Iravati and Gunjan’s next step? Will Yug and Rajputs get angry on Kahani for earning by dancing on road? 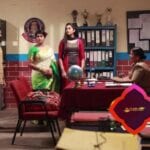