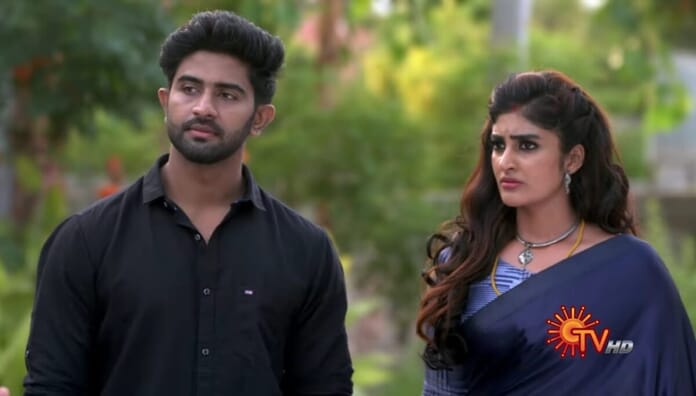 SunTV’s popular show Kannana Kanne is gearing up for more drama with Gautam leaving the house.

In the previous episode, it was seen that Meera requested Yuva to not argue with her Dad. Yuva promised Meera that he will handle his dad with patience. Preethi phoned Pushupa and informed her about Kodeeshwaran creating a scene at their house. She told that Kodeeshwaran vowed to separate Yuva and Meera. She added that no one ever insulted her dad like this and asked Pushpa to control Kodeeshwaran. Pushpa said that only Yuva can handle him. She requested Preethi to tell Yuva to come home.

Preethi informed Yuva that Kodeeshwaran is creating a scene at his house as well. Meera wanted to accompany Yuva with Preethi. Yuva tried to stop her stating he can’t bear her insult, but he agreed when Meera was adamant.

In the latest promo, it’s seen that Santosh takes Preethi apart to talk. They both argue. Meera, who sees this, gets doubtful and asks Preethi if there’s any problem between them. Preethi says that even Meera started growing suspicion of her(Preethi). She says that she doesn’t know how Meera will react if she learns that she called Santosh to stop the wedding. Preethi says that the lie she told to save a truth separated her dad from her.

What will happen next? Will Preethi’s truth come out?

Stay tuned for latest update of your favorite Tamil shows.