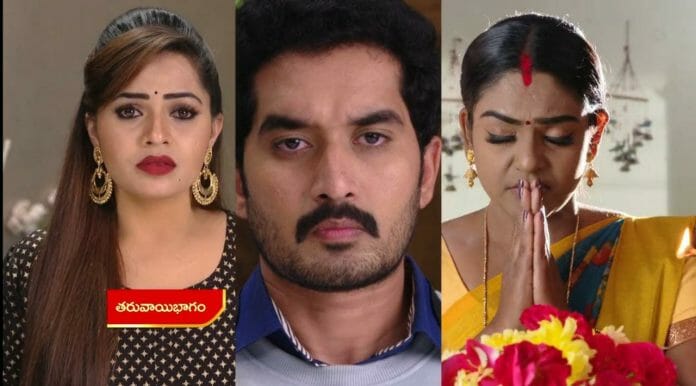 The episode starts with Karthik asking Mounitha what is their child’s name. Mounitha says his name is Anand. Karthik thinks the name is quite familiar. Mounitha says he heard when she is calling the child Anand all the time. Mounitha gets relieved feeling that Karthik didn’t recall anything and decides that she has to shift from this place as quickly as possible.

Mounitha sees Deepa coming to her house. Mounitha asks Deepa to stop and starts scolding her asking if she doesn’t have any shame to come here all the time? Deepa says to Mounitha to shut up and starts arguing with Mounitha.

Deepa says she knows how she became pregnant and says before she sees her end she asks Mounitha to leave everything. Mounitha asks Deepa to leave them and get out of their lives. Deepa also questions Mounitha saying that she knows the side effects of using the medicines for quite a long time but you are still using them on Karthik knowing of the consequences. Mounitha says she has no choice as she wanted to side Deepa from Karthik’s mind. Deepa comments on it.

Deepa says to Mounitha that she did a good thing by bringing Anand here and says if he recalls his memories with Anand then he will recall me. Mounitha says there is no chance for it. Deepa says there is a high probability. Deepa calls for Karthik. Karthik asks Deepa what is she doing here. Deepa asks Karthik how is he feeling and if he is enjoying the time with his child. Karthik says he is enjoying it and says in his childhood he might have enjoyed it a lot. Deepa agrees and says the importance of memories to Karthik.

Sourya says to Hima that she will only come with them after she finds her parents and says if they try to meet her again then she will run away to a place where they couldn’t find her. Anandrao says Sourya not to do that. Anandrao and Hima are about to leave. Sourya asks Anandrao if there is anyway to erase this tattoo. Hima swears on herself and says to Sourya to not erase this tattoo. Hima asks Anandrao to leave from there.

But after Deepa entered she is getting restless. Karthik questions Mounitha why does she gets worried seeing Deepa and doesn’t allow him to meet Deepa. Mounitha thinks he is right and but she couldn’t say the answer to him. Mounitha cries and reminds what she did for him from taking him to the hospital upto now. Mounitha also points out to Karthik that he is not consoling her.

Mounitha shows her frustration to Karthik about what happened last night. Karthik tries to cool Mounitha down. Mounitha acts like she is angry and says to him they have to go to a place where he can recall everything. Karthik asks where is the place that she is talking about. Mounitha doesn’t tell him and asks him to come if he trusts her. Karthik agrees.

Siva comes to Deepa to tell that Mounitha is taking Karthik and the child to some place. Deepa asks where are they going. Siva says he doesn’t know. Deepa requests Siva to find out and bribes him with food. Siva agrees. Mounitha and Karthik talk about where they are going while eating food. Karthik leaves after a while to get ready. Siva comes and says to Mounitha that he told to Deepa just like she asked him to. Mounitha says to herself once Deepa follows them then she will get trapped. Siva asks Mounitha where she is going. Mounitha doesn’t answer. Siva says he doesn’t need to know and walks away from there.