As reported earlier Deepa house atrests Mounitha, Priyamani and removes sim from Priyamani phone and keeps Mounitha phone with her than Deepa asks Mounitha to tell what she did to break their wife and husband relationship. Mounitha sats she didn’t do anything. Deepa gets angry and breaks the vase and tells I’m the changed version of Deepa who is on mission to set my martial life, I will kill you and get to know the truth even from your dead body.

Mounitha says it’s crime to arrest them in house. Deepa shuts her saying Karthik hates you once I reveal truth to him. At venue Doctors mocks Karthik and accepts his resignation as president. Karthik reaches to Mounitha place and left from that place seeing the lock. Deepa asks them to arrange food for her. They goes than Deepa comes out of Mounitha house. Priyamani and Mounitha notices Deepa is gone. Deepa shows letter to Contestable and asks her something.

Agree that she is your daughter, you need position as father but you won’t accept that you’re her biological father, wait for sometime very soon I will return your daughter along with the Truth and I’m going to bring proofs Infront of your eyes and gonna break your suspicion.

Can Mounitha reveal the truth? How will Karthik react if he knows the truth? 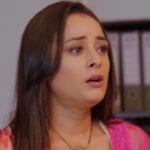