Episode starts with Nivedita says don’t know how to react with Prerna entry and it’s complicated. Mohini says it’s not complicated but intentional act of Prerna. Anurag says to Mohini he will drop Prerna to her house. Mohini calls Prerna saying She have something for Veena.

Veena checks job notifications in the paper for Prerna. Shivani asks is she really wants Prerna to quit her job from Anurag company. Veena says Prerna will be happy if Anurag is away from her path. Shivani thinks Veena is correct but can Prerna live without Anurag.
Komolika gets irritated with Moloy behaviour. Mohini asks Prena why she entering Anurag life again and she knows her drama very well and asks her to don’t use fate for your intentions. Prerna says destiny only helping them to stay near. Mohini says I know your intentions and than they get interrupted by Anurag. Mohini says she bought saree for Veena.

Komolika breaks things in her bathroom. Her eyes are teary reminscing Prerna with Anuag and she slaps herself to make her smile. Sonalika thinks to do something to take her revenge from Prerna.

Mohini gives saree to Prerna. Anurag says destiny wants them to work together it’s like we both are connected together. Mohini says Prerna it’s good of you quit the job. Anurag says he convinced her to work so he asks her to allow until he gets new secretary. Mohini thinks to warn Sonalika before Prerna breaks her life.

Mohini says to Sonalika youre perfect wife for Anurag and he is good but Prerna is not good. Sonalika asks Mohini to talk with Moloy if she feels Prerna is bad so Anurag will change his secretary.

Mohini asks Moloy did he talk with Prerna. Moloy says yes and Prerna forgives him for sending her away from home. Mohini says it’s her decision and asks Moloy to keep Prerna away from Anurag. Moloy says Anurag is fine even after Prerna is near to him so if he remembers everything it’s easy to unite them. Mohini says than what about Sonalika. Moloy says they can’t leave Prerna because she is carrying Anurag kid. Mohini says it can be Bajaj kid. Moloy slaps her. Mohini gets shocked. Moloy says he will leave house with Anurag and Prerna if she says something in this way again. Mohini decalres her hate for Prerna for snatching Anurag and Moloy.

Komolika says in this challange Prerna is going to loose everything including her baby. Komolika thinks her marriage happened with Anurag but their is no romance except pillow wall between them. Sonalika asks servant to inform Mohini to come to her room. Mohini gets shocked seeing pillow wall and asks Sonalika why they are sleeping on bed with Pillow wall. Komolika says their marriage happened suddenly and hints to plan honeymoon with Anurag. Mohini agrees 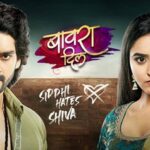