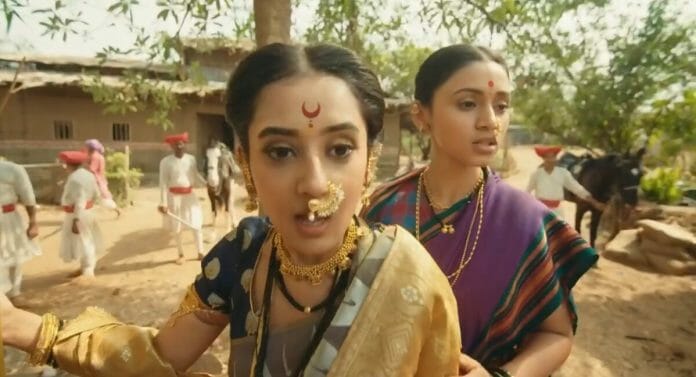 The episode starts with Kashi asking Baji that what he is talking about to which Baji diverts the topic and tells Surya about sending Chima to a safe place. Surya leaves and Baji assures Kashi that there Chima will get good training to develop his fighting skills. Kashi says but she has another plan, she requests Baji not to reveal about that to anyone. She says Chimaji is caught by her soldiers and he is caged now. Baji gets surprised to know that and wonders what is Kashi’s plan. Kashi adds Chimaji will stay here and will be trained by the three efficient soldiers.

Chimaji tells the soldiers to leave him alone and Kashi meets him. Kashi says she only told the soldiers to kidnap him. Chimaji can’t believe that and Kashi starts her drama. Kashi says she tried to send him to war so that he dies but he came back safely, he came out of well and nothing happened to him. She thought she will kill Bajirao’s brother so that Peshwa’s post belongs to her son only. But he saved himself. Power is such a thing that brothers become enemies and a son kills his father. She gives Aurangzeb’s example to Chima.

Kashi says she wants Chima to die and she will do it in this way by kidnapping him. Noone will try to know about him as he is a coward and a weak person. Chima says she used to care for him then how can she utter such words for him. Does she really think he is capable of nothing? Kashi says everyone thinks so not just she. But noone tells him directly. Chima gets hurt. Bajirao overhears everything and thinks Kashi will get Chima’s hatred after this.

Kashi pretends to get Chima killed by the soldiers but Chima says he won’t die that easily but he will expose Kashi. He curses her saying she will have her husband but won’t get love. She will get insulted one day like him. She won’t be happy. Kashi says his curse won’t come true as he is noone special. Kashi tells him to eat food properly before dying, she leaves.

Chima angrily throws away the food plate. Kashi cries near Baji and he consoles her saying he will tell Chima the truth. Kashi stops him and he says Chima said wrong things to her when she wants his good. Kashi shares her childhood story how Bhavani told her that bird pushes it’s kids from nest so that they learn to fly. Kashi is doing the same with Chimaji. Baji says he knows Kashi will become a good mother in future. Kashi suddenly is about to faint but Baji holds her. He makes her lay on bed.

Chima thinks he can’t plan something in empty stomach. He eats the food by picking it from the ground. Soldiers make fun of him and later they let him run away to tease him. They throw arrows at him and he thinks he has to defeat them otherwise they won’t let him go. Baji wants to call the doctor but Kashi she doesn’t need anyone except him. She says he should stay near her and she holds his hand. He takes care of her and she ties a knot with their clothes. She says though he is a warrior, he won’t stay close to her always but whenever he is, he won’t leave her alone. Baji assures her and then she falls asleep.

Surya calls Baji and informs another message came for him from Bundelkhand. Baji goes out to see and finds an arrow on the tree. He asks who sent a message like this. He jumps and takes out the arrow. He reads the letter and thinks Kashi should not read it no matter what. Kashi wakes up and secretly observes Bajirao.